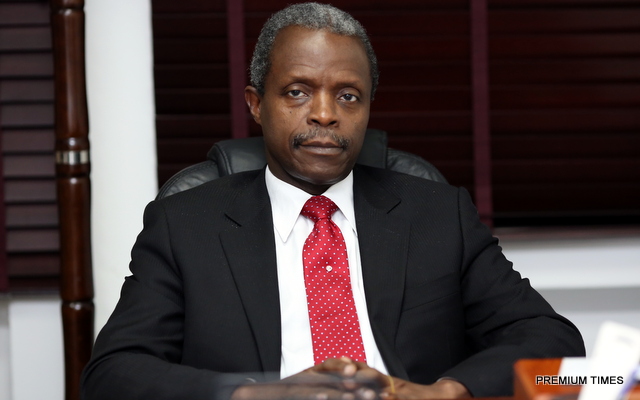 After days of marathon meetings and horse-trading, the Presidential candidate of the All Progressives Congress [APC], Muhammadu Buhari, has settled for a former Attorney General of Lagos, Yemi Osinbajo, as his running mate, PREMIUM TIMES can authoritatively report.

A source close to Mr. Buhari said the APC agreed on Mr. Osinbajo Tuesday night as a concession to a former Lagos Governor, Bola Tinubu, who for days pushed himself forward for the slot.

Mr. Tinubu’s  presumed candidature, according to party sources, was aggressively pushed by former party chairman, Bisi Akande, and a cohort of south west governors, which did not sink well with many of his own long time allies.

Mr. Tinubu’s  first choice candidate however was Yemi Osinbajo, 55, a Senior Advocate of Nigeria, and University of Lagos professor of commercial law, who helped rebuild the Lagos State judiciary as a national reference point.

He was a two-term attorney-general of the state, and connected to the powerful Awolowo political dynasty by marriage. He is married to the late Obafemi Awolowo’s grand daughter.

Party insiders, who do not want to be named, told PREMIUM TIMES in Lagos that once Mr. Buhari expressed open preference to have a running mate from the South West, Mr. Tinubu offered him a three-man list that had  Mr. Osinbajo, himself [Tinubu], and Mr. Fashola.

The Tinubu gambit, according to his aides, was, however, a strategic ploy to reinforce Mr. Osinbajo’s candidature and dim Mr. Fashola’s chances since it seemed Mr. Buhari appeared to have a soft spot for him.

“In essence, Tinubu, while promoting claims to his own candidature, was actually playing a wedge politics to fend off opposition to Osinbajo,” one of his closest aides said in Abuja Tuesday night.

Mr. Osinbajo, a top cleric in the powerful Redeemed Christian Church of God, RCCG, and the Chairman of the governing board of the Redeemer’s University, was thought to be a powerful choice to match the Jonathan ticket that has been wooing the  Christian constituency through serial pilgrimages, and the subtle elevation of the status of the President of the Christian Association of Nigeria to a virtual presidential adviser’s position.

The ruling Peoples Democratic Party [PDP] and many of its campaign slogans have sought to milk the deficit implicit in a possible Muslim-Muslim ticket, an arrangement that would have emerged in the event of either a Tinubu or Fashola candidature as running mates.

Party leaders, offering insight on the vice presidential pick, said  “Yes, it has been agreed that Mr. Osinbajo should be the one, it was finally agreed last night. There is going to be a press conference to present him today.”

Professor Osinbajo, who is also the resident minister at the Olive Tree parish of the  Redeemed Church on Banana island of Lagos State, is one of the closest aides  to the Church’s General Overseer and revered clergyman, Enoch Adeboye.

He has at various times been Master of Ceremony at the church’s Holy Ghost Convention and Congreses usually held at its Camp Ground along Lagos-Ibadan Expressway.

By choosing Mr. Osinbajo, Mr. Buhari is making history of running with another cleric and lawyer.

Tunde Bakare, the iconoclastic cleric who ministers at the Latter Rain Assembly was his running mate in the 2011 presidential election.  Mr. Bakare also trained as a lawyer who worked in the law offices of the late Gani Fawehinmi and the late Rotimi Williams.

Nevertheless, before settling for Mr. Osinbajo, the leadership of the APC had first resolved that neither Governor Rotimi Amaechi of Rivers State nor Adams Oshiomhole of Edo in the South-South geo-political zone would be on the ticket by narrowing its search to the South West region.

In line with the provisions of the Electoral Act 2010, political parties have up till Thursday to submit names of their presidential and vice presidential candidates to the Independent National Electoral Commission [INEC].

The National Chairman of the APC, John Odigie-Oyegun, had told journalists on Tuesday that the party would announce its presidential running mate today in keeping with the nation’s electoral law.

NFF not under pressure to give Keshi new contract– Pinnick