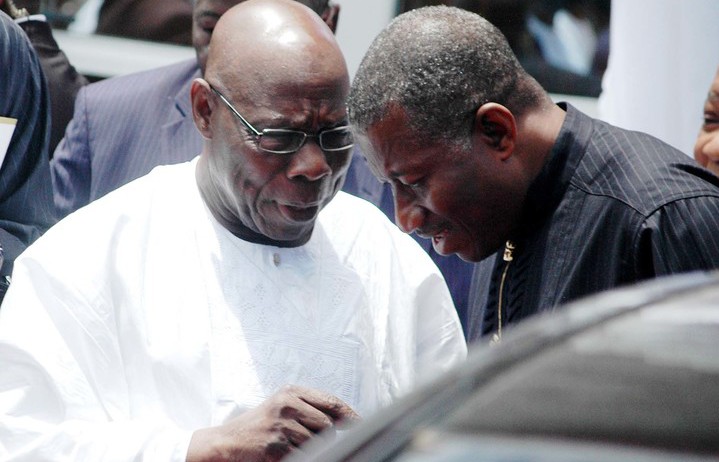 Former President Olusegun Obasanjo has again torn at President Goodluck Jonathan, saying Nigerian democracy remained at risk due to the action of the present administration.

Speaking at a book Launch in honour of the pioneer chairman of the Independent Corrupt Practices Commission, ICPC, Mustapha Akanbi‎, in Abuja, Mr. Obasanjo, who is the Chairman of the occasion, said the president should stop encouraging ‘verbal violence which may not physically hurt but has ways of degenerating into physical violence’.

Mr. Obasanjo said the greatest indictment against any administration is to be seen trying to destroy opposition of all sort‎s which invariably mean destroying democracy.

“Management of democracy without resorting to brute force and dictatorial tendencies must be cultivated,” the former President said.

“As a leader, you must not deliberately do evil or condone evil. You should know that you will one day give account to God, you may cover up here, but before God, there is no cover up.”

The former president also spoke at lenght on the President’s handling of the Boko Haram insurgency, ‎corruption, the economy and youth unemployment.

On insecurity, Mr. Obasanjo said Boko Haram is not out to “frustrate anyone’s political efforts” and lamented that it took Mr. Jonathan the years to ‎fully understand the menace.

On corruption, Mr. Obasanjo said, “when the head is rotten, the whole body is useless”

On the economy, he said Nigeria would continue to sink deeper and that what Nigerians are told about the state of the economy “is not truly what the economy is”.

“The economy is in doldrums, if not in reverse,” he said.

Mr. Obasanjo’s latest attack on the President is coming seven days after he rated Mr. Jonathan’s performance as below average.

The former president had spoken last weekend in Abeokuta while addressing book writers as part of activities marking the Ake Arts and Book Festival.

“I rate this current administration below average,” Mr. Obasanjo said in response to a question about Mr. Jonathan’s performance.

The former president also said he deserved credit for helping an individual from a minority tribe become Nigeria’s President.
“Rather than take blame for bringing Jonathan to power, I should be taking credit,” he added.

The Nigerian presidency responded Sunday, slamming Mr. Obasanjo and describing his rating as untrue and misleading.
In a statement in Abuja, the Senior Special Assistant to the President on Public Affairs, Doyin Okupe, said Mr. Obasanjo’s rating was at variance “with the facts on the ground”.

Mr. Okupe said President Jonathan had performed so well that “in terms of performance and achievements, no administration since 1960 when Nigeria gained independence from Britain, has done as much as that of President Jonathan”.

Keeping It Real With Adeola – Is it true that the opposition party APC, is trying to Islamize Nigeria?