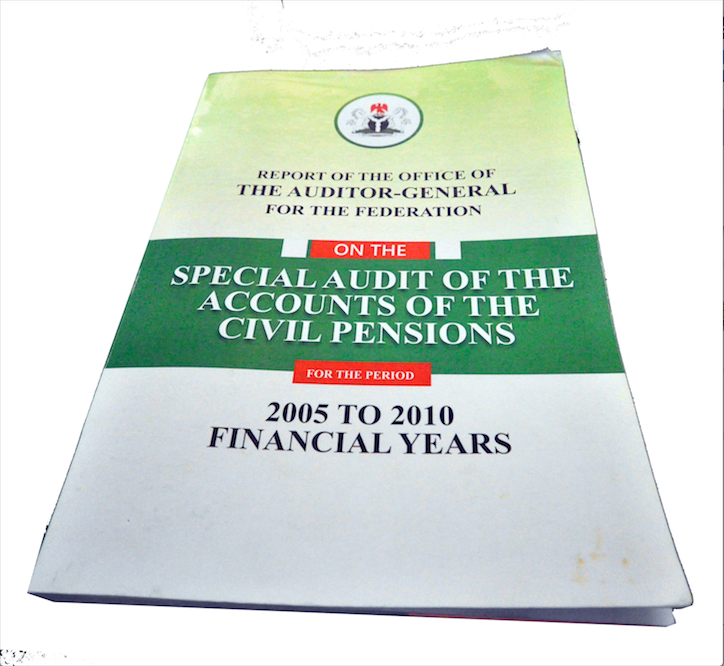 A damning report by the office of Nigeria’s Auditor General has indicted a former Head of the Civil Service of the Federation, Stephen Oronsaye, over an alleged N123billion fraud perpetrated during his tenure, between 2009 and 2010, PREMIUM TIMES can authoritatively report today.

The 169-page report, entitled “Special Audit of the Accounts of the Civil Pensions”, found Mr. Oronsaye guilty of allegedly presiding over the looting of the nation’s resources during his tenure.

The audit by the Auditor General arose from the work of a Special Audit Team constituted by the Federal Government in May 2011 to conduct a comprehensive examination of the accounts of the Civilian Pension Department domiciled in the Office of the Head of the Civil Service of the Federation.

The audit, which covered the period 2005 to 2010, uncovered monumental financial irregularities, opaque transactions, irregular and abnormal running costs, and outright stealing and kick-backs said to have reached its zenith during the 18 months that Mr. Oronsaye served as Head of Service.

The Auditor General’s office, insiders say, completed its assignment and submitted its report to government in 2012. But no action has been taken to bring all those indicted to book.

This newspaper understands that there is a high-level lobby at the highest reach of our government to suppress the findings and allow those found culpable to enjoy their loot.

While allegations of massive corruption hangs around his neck, Mr. Oronsaye remains very close to President Goodluck Jonathan, with unhindered access to the presidential villa.

He also continues to occupy some of the most important positions in the country. He is, for over 10 years now, chairman of the Presidential Committee on Financial Action Task Force [FATF] and is board member of both the Nigerian National Petroleum Corporation [NNPC] and the Central Bank of Nigeria [CBN], the two public organisations widely considered the most lucrative in the country.

Although top government officials are working hard to suppress the damning report, PREMIUM TIMES has now scooped its content for you. And it was simply shocking and mind-boggling.

The report found that the pension payroll was never subjected to internal audit between June 2009 and December 2010; and that the over N52billion paid as monthly pension under Mr. Oronsaye’s reign remained largely unaccounted for. The payments, auditors say, were not presented for internal and federal audits for prepayment audit as required by Nigerian financial regulation.

The examination also documented evidence of payment for goods running into hundreds of millions of naira that were not supplied. For instance, about N700million was paid to 223 different contractors for store items. However, no payment vouchers were available for inspection as the investigators carried out their assignments. The payments were also not recorded in the cashbook, leading auditors to conclude that since store receipt vouchers could not be traced, the items were most probably never supplied.

Equally tainted with financial irregularities, the report says, was pension remittance to states and industrial unions during Mr. Oronsaye’s reign. A serious infraction was detected in the payment of N2.08billion check-off dues to the Nigerian Union of Pensioners in 2009 and 2010. When auditors computed and analyzed the figures in accordance with the mandatory one per cent deducted from statutory pension allocations, they found that N1.03bn was overpaid. The report alleged the amount was passed to Mr. Oronsaye as kickbacks.

The auditors also expressed shock at the absence of a single receipt from any state government acknowledging the payments purportedly made to them as five per cent federal government contribution and reimbursements. Consequently, there was no single shred of evidence to indicate that these remittances were actually made, the report said.

Robbing the dead and litany of secret accounts

Even more damning was the revelation that the N15.6billion released by the Federal Government for the settlement of death benefits of deceased civil servants in July 2010 could not be accounted for.

Checks by this newspaper suggested the money was moved to an illegal account in Federal Secretariat branch of Union Bank. The account, we learnt, was personally operated by Mr. Oronsaye and managed by his sister in-law. The funds, those who should know said, were placed in an interest-yielding account with the bank without any document to indicate how much was agreed upon as interests.

Indeed, the report revealed the existence and operation of unauthorized accounts. Between 2009 and 2010, 58 bank accounts were allegedly opened at the instance of Mr. Oronsaye without the knowledge and approval of the Accountant General of the Federation. Over N54 billion were transferred to these illegal accounts and eventually withdrawn for undisclosed purposes. The accounts had no cashbooks, payment vouchers, bank reconciliation statements, transcript or any evidence of expenditure returns.

A history of graft

The Auditor General’s report has now added a new layer to the allegations of corruption that have been swirling around the former head of service since December when PREMIUM TIMES broke the story that the Economic and Financial Crimes Commission [EFCC] was investigating him over a N6.2billion biometric enrolment scam.

That report had detailed EFCC’s investigation into how Mr. Oronsaye and other top directors of the Nigerian civil service colluded to allegedly defraud the nation of N6.2 billion pension fund.

The fund, allegedly stolen through a maze of bogus contracts, was meant for biometric enrolment and payment for computer accessories that were never supplied.

Reliable sources at the EFCC had told this newspaper how, between 2009 and 2010, over N6 billion in fake contracts were awarded and paid for under Mr. Oronsaye’s supervision.

In December Mr. Oronsaye was invited by the anti-graft commission to answer questions relating to the multi billion naira pension fund.

Contacted last Thursday, the EFCC wouldn’t say how much progress it has made in its investigation and why it was yet to charge Mr. Oronsaye to court over the matter.

“I have to check with our investigators to give you a definite answer but I’m aware investigation has been going on in the past months,” said Wilson Uwujaren, the spokesperson for the commission. “I can assure you that this commission is committed to getting to the bottom of the case and has put some of its best investigators on the matter.”

According to sources in the EFCC, Innovative Solutions and Project Limited, a company allegedly handpicked by Mr. Oronsaye, received a contract of N63 million for biometric data capture. The contract, however, served as a conduit through which three individuals and five companies got N705,368,245.

Other companies which had no contract to participate in the biometric data capture exercise but were paid include Frederick Hamilton Global Limited, who received N119,398,500; Xangee Technologies got N153,146,719; Fatidek Venture received N30,056,000; while Obanlado Enterprises was paid N96,765,400.00.

During its investigation, the EFCC uncovered how Phina Chidi, a deputy director in the Pension Account at the Office of the Head of Civil Service of the Federation, OHCSF, who had given a written statement to the commission in January, 2011, disclosed to the agency how she was made to shop for companies that would execute contracts and make returns to Mr. Oronsaye.

“I was asked by Dr. Shuaibu (Teildi Shuaibu, director, Pension Account) to shop for company names to execute our contracts, proceeds of which should be given to Mr. Stephen Oronsaye  the then Head of Service,” Mrs. Chidi said in her latest statement.

Mrs. Chidi also detailed how the proceeds of such deals were kept in the accounts of two banks before Mr. Shuaibu helped to transfer them to Mr. Oronsaye.

Investigation by this newspaper however suggested that there are some corruption fronts that both the Auditor General of the Federation and the EFCC are yet to cover.

For instance, highly placed sources at the presidency and the office of the Head of Service showed PREMIUM TIMES documents detailing how Mr. Oronsaye, on June 30, 2010, transferred N113million from pension account No; 4501040012292 with Union Bank Plc to a Unity Bank account named Contingency.

The said Contingency account turned out to be a State House Account in the name of Principal Private Secretary to the President, which Mr. Oronsaye continued to operate many years after he was removed as private secretary to the president.

Further checks showed that a certain Shola Aiyedogbon withdrew substantial part of the illegally transferred funds for onward delivery to Mr. Oronsaye. It was only on January 27, 2011 that Unity Bank alerted the Permanent Secretary, State House, that Mr. Oronsaye was still operating the account before he finally let go.

Mr. Oronsaye declined to comment for this story. For over a week, he could not be reached on his telephone. On Monday morning, his phone rang but the former head of service did not answer or return the call. He also did not reply a text message sent to him.

However, Walter Duru, his spokesperson, on Sunday told PREMIUM TIMES the allegations against his principal were false and fabricated.

“You can take it from me that Mr. Oronsaye can never be involved in anything fraudulent. Those allegations were all fabricated. There is no truth in them.

“I can assure you that Mr. Oronsaye has done no wrong. If anything he deserves commendation and respect from everyone in this country for his selfless service to the nation.”

Mr. Duru promised to reach out to Mr. Oronsaye to enable him to provide a more robust response to PREMIUM TIMES’ enquiry on Monday.

But rather than do this, Mr. Duru tried to preempt our story by procuring Emmanuel Onwubiko, who runs an Abuja-based NGO, the Human Rights Writers Association of Nigeria, to circulate a press statement suggesting that this newspaper was being used by some interest groups to witch-hunt Mr. Oronsaye.

It is unclear why an organization, that claims to defend human rights and promote accountability would scramble to defend the alleged massive loot of public funds by the former head of service.

EXCLUSIVE: NNPC at War with Agip over sidelining of indigenous oil firm