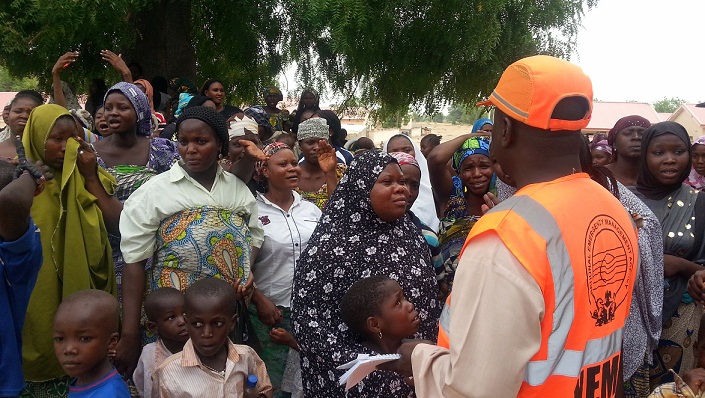 Thousands of women and children stranded in Bama, one of the towns seized by Boko Haram in Borno State, are dying of thirst and hunger as insurgents stiffen their grip on the town, local leaders and the Borno State government said Thursday.

Members of Bama community, under the Bama Development Association, and officials of the state government accused the Nigerian government and the military of lying about the town having been reclaimed by government forces.

Speaking Thursday in Maiduguri, the community leaders of Bama, and officials of the Borno State Government committee on displaced persons, debunked the federal government’s claims that all is well in Bama.

“From Monday to date, about 11 days now, Bama, the second largest Local Government Area in Borno, is under the custody and control of the dreaded Boko Haram sect; this is the whole truth and nothing but the truth,” said Mohammed Hassan, the chairman of BDA, at a press conference.

Mr. Hassan said since the takeover of the town by Boko Haram, government troops have not made effort to reclaim the town and rescue the women and children as well as aged persons stranded there.

“After 11 days of the invasion and takeover of Bama, no search and rescue operation has been conducted; no damage assessment has been made, even though the security and welfare of citizens is the fundamental and constructional obligation of any meaningful government,” Mr. Hassan said.

The group called on the state and federal government to expedite action towards reclaiming Bama from the terrorist as those in captivity are under serious trauma, starvation, and with various degrees of injuries.

The group said it could not account for more women and children who had gotten missing in the process of fleeing through the rivers.

“Some of the women and children had drowned at River Yadzaram in the process of fleeing, while others were shot dead… Apart from those in captivity others who managed to cross the river were killed in the nearby villages, and we still have not been able to recover their corpses for proper burial,” Mr. Hassan said.

At a separate news briefing, the chairman of Borno Committee on Displaced Persons, Jidda Shuwa, said so far 7,000 displaced persons have arrived Maiduguri, the state capital, in the last 11 days. He said many of the displaced persons travelled by foot.

Mr. Shuwa also refuted the government’s claims that Bama had been reclaimed.