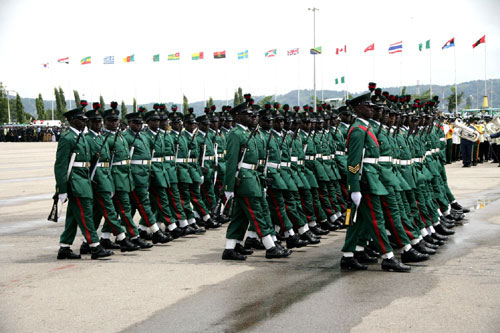 The Nigerian Army is looking beyond the menace of Boko Haram in its determination to stamp out terrorism and insurgency in the country, the Chief of Army Staff (COAS), Lt.-Gen. Azubuike Ihejirika, has said.

Mr. Ihejirika made the statement in Kontagora, Niger, on Tuesday at the passing out parade of 1,952 soldiers trained in basic counter-terrorism and counter-insurgency as well as the inauguration of the Nigerian Army Training Centre (NATRAC) complex, named after him.

He said the test of a nation did not lie solely in its ability to solve only current problems but in handling future challenges that include armed robbery and other violent crimes.

The COAS said that soldiers must not relax but devise means of dealing with both current and future issues of security.

Ihejirika enjoined Nigerians to remain steadfast in their support and co-operation with the security agencies in the nation’s determination to rid the country of terrorist activities.

He said that 400 young officers and 1, 500 young soldiers were to be drafted to the centre to receive similar training in counter-terrorism course, while another set of soldiers would be trained in Sokoto.

”All these moves are meant to ensure that we are not thinking of Boko Haram alone because when Boko Haram goes, another one may come, at least that is the way we think in the army, ” he said.

The NATRAC Commander, Maj.-Gen. S. C. Audu, commended the COAS for his visionary leadership, which he said, had paved the way for innovative infrastructural development across the nation’s army formations.

”At no time has the Nigerian Army witnessed positive transformation like during the tenure of Lt.-Gen. O.A. Ihejirika, ” he said.

Mr. Audu said the graduands include 138 young female soldiers who were trained for 37 days at the centre in combat competences to enable them face the challenges in the field.

”It is important to let you know that you will be actively engaged in internal security duties. Your training has given you the required confidence to be capable of operating in all types of environment, under different threat conditions, ” he said.

Mr. Ihejirika had on arrival in Kontagora, paid a courtesy call on the Sarkin Sudan of Kontagora, Alhaji Saidu Namaska, where he expressed delight with the cordial relationship existing between soldiers and people in his domain.