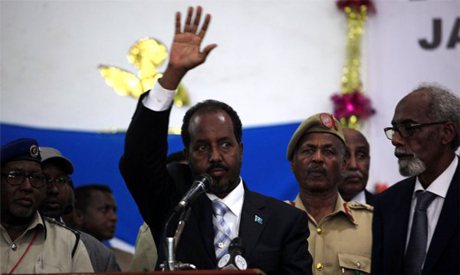 The African Union head commends the outgoing president of the war-torn country for conceding defeat.

The Chairperson of the African Union Commission, Jean Ping, on Tuesday expressed happiness over the successful completion of the presidential election in Somalia.

Mr. Ping, in a statement in Addis Ababa, said the election of Hassan Mohamud as the new President of the Federal Republic of Somalia was held in a transparent and fair manner.

He commended the outgoing President, Shariff Ahmed, for having gracefully conceded defeat and for his significant contribution to the peace and reconciliation process in his country.

Mr. Ping said the development ushered in a new chapter in the history of Somalia.

He commended all the Somali stakeholders and people for the maturity and commitment displayed over the past few weeks to complete the transition in difficult circumstances.

Mr. Ping urged them to remain steadfast and to continue to be driven by the higher interests of their country, in order to overcome the many challenges that lie ahead.

He called on them to build on the significant results achieved and the progress made by the AU Mission in Somalia and the Somali forces to further the peace and reconciliation process.

Mr. Ping also acknowledged the critical role that the region, the East African Community, and the rest of the international community and other partners have played in achieving the present level of success in the peace process.

He urged the AU Member States and other partners to remain actively engaged, and to enhance their assistance to Somalia, to enable Somalia meet the even more demanding and complex tasks ahead.