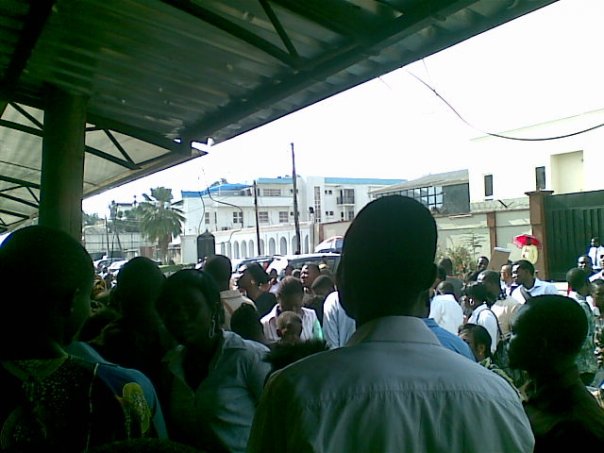 Nigerian supporters take their protest to the South African High Commission in Lagos in support of the on-going miners feud.

Protesters unhappy about the recent shootings of platinum miners in South Africa, on Thursday, besieged the country’s High Commission in Lagos.
The embassy staff declined to meet the Nigerian protesters, insisting that they pass their letter through the High Commission’s gates for onward passage to the South African government.
Three weeks ago, police in South Africa opened fire during clashes with the striking miners leaving 34 people dead.
The protesters – about 20 of them, under the umbrella of Democratic Socialist Movement, said that the South African government must listen to the miners’ demand for a pay rise.
They also called on the government to investigate the killings.
“In 1960, our brothers were killed in Sharpeville; in 1976, people, including women and children, were gunned down in Soweto massacre, and now this,” Chinedu Bosah, Publicity Secretary for the Campaign for Democratic and Workers’ Rights, said.
“The killing was used to intimidate the masses and workers from challenging the government and multinationals in future,” he added.
A petition addressed to Jacob Zuma, the South African President, asked that the families of the dead and injured be compensated.
However, the protesters were forced to wait for over half an hour before a staff of the High Commission came out.
They had threatened to picket the Commission’s office until their letter was received.
Linda Pule, First Secretary, Corporate Services Manager at the South African High Commission, said that the protesters’ letter would be sent to the “appropriate quarters”.
The manager, however, stated that he was following due process by asking that the letter be passed to him through the metal bars fencing Commission’s office.
“You should have informed the Commission before going ahead with the protest,” he said.