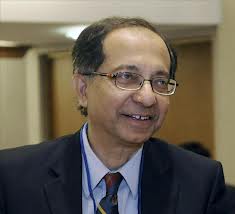 Basu, an Indian national, most recently served as Chief Economic Adviser of the Government of India, Ministry of Finance, while on leave from his position as Professor of Economics and the C. Marks Professor of International Studies at Cornell University.

“Having worked in a Ministry of Finance, in addition to his impressive academic achievements, Kaushik is uniquely suited to help us offer evidence-based solutions and advice to client countries and provide innovative excellence in leading our development research,” World Bank Group President Jim Yong Kim said.

“Kaushik brings first-hand experience from a developing country and will be a terrific asset to the institution,” he added.

Basu is a fellow of the Econometric Society and has been awarded India’s National Mahalanobis Memorial Award. In May 2008 the president of India awarded Basu one of the country’s highest civilian awards, the Padma Bhushan, for distinguished service of high order.

He is the third Indian to hold high profile position at the World Bank.

Kalpana Kochhar, the Chief Economist for the South Asia Region of World Bank is also an Indian.

Teenager in court for committing adultery with neighbour’s husband