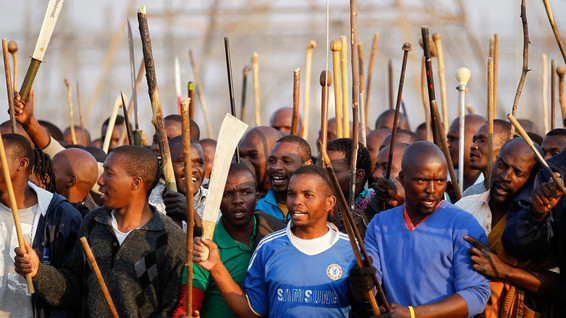 The tiff between the miners and Lonmin, the world’s third largest platinum producer, continues to draw ire from South Africans.

South African prosecutors provisionally withdrew murder charges, on Sunday, against 270 miners who had been accused of killing 34 striking colleagues, shot dead by police.

The prosecutors however said they could be re-charged when investigations are complete.

Public anger had been mounting at the charges, made under an apartheid-era law under which the miners were deemed to have had a “common purpose” in the murder of their co-workers.

The police killing of the workers, in August, at the Marikana mine, run by platinum producer Lonmin, was the worst such security incident since the end of white minority rule in 1994; and recalled memories of state brutality from that era.

“Final charges will only be made once all investigations have been completed. The murder charges against the current 270 suspects will be formally withdrawn provisionally in court,” Nomgcobo Jiba, the acting National Director of Prosecutions, said in a televised news conference.

The miners will be released from prison starting this week. In all, 44 people were killed in the wave of violence stemming from an illegal strike and union turf war.

Top members of the ruling African National Congress (ANC) had also expressed dismay at the charges, as a public backlash gathered.

“We are all surprised and confused by the National Prosecuting Authority’s legal strategy,” the ANC’s chief whip in parliament said on Friday.

The ANC, whose members were gunned down by police at protest rallies, and targeted with draconian laws, before Nelson Mandela’s election as the country’s first black president, has been criticised for using similar tactics now that it is in power.

The current president, Jacob Zuma, seeking re-election in December as the leader of South Africa’s dominant party, has seen his support decline as a result of the mine workers crisis.