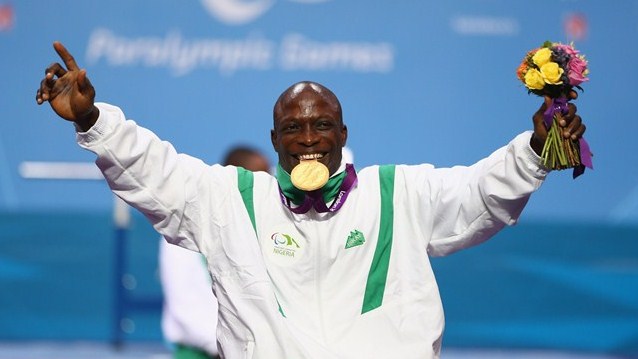 Adesokan also broke the world record in his event for the gold.

While the country endured two weeks of endless wait for medals at the Olympics proper,  the Special Athletes literally hit the ground running in the first day of action in London

Adesokan, 33, did it in style, on Day 1 of the London 2012 Paralympic Games at ExCel, when he broke the world record in the men’s 48 category by lifting 178 kg, which is over three times his body weight.

For many, that could pass for the beginning of a medal rush for Nigeria at the Games.

The country’s 29- man team to London will be partaking in four events which are power-lifting (16 athletes), athletics (nine), table tennis (two) and wheelchair tennis (two).

Sadly, unlike the pump and pageantry that greeted the departure of the able bodied athlete that went on to fumble in London, same cannot be said of the physically challenged athletes who failed to get any attention from the media,  corporate world and even next to nothing from the constituted authorities.

Nigeria, it will be recalled, made her Paralympic Games debut at the 1992 Summer Paralympics in Barcelona where only six male athletes represented the country and came back with three gold medals

Nigeria has participated in every subsequent edition of the Summer Paralympics, winning a total of 22 gold medals, 11 silver, and 12 bronze.

The Sydney 2000 Games remain the best outing for Nigeria where the athletes came back with seven gold medals; a feat many see possible again in London.

Sports Minister and Chairman of National Sports Commission, Bolaji Abdullahi reportedly heaved a sigh of relief when the cherry news came, and urged the Nigerian heroes and heroines not to relent in their efforts to win more medals.

“The Minister is happy with the feat of Yakubu Adesokan in winning the first gold for Nigeria at the Paralympics and also over-joyed at his feat of breaking the World record,” the Minister’s Special Adviser on Media, Julius Ogunro said “It is one thing to win gold and another super feat to break the World record.”

Action will continue Friday across the other sports