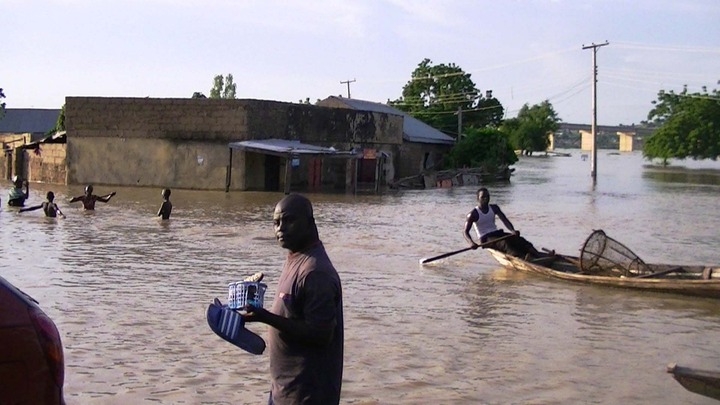 The floods caused by the opening up of a Cameroonian dam has left 50,000 Adamawa residents homeless.

The release of water from Lagdo Dam in Cameroon which caused massive flooding in Adamawa state has killed at least 17 persons and ravaged thirty riverine villages in the state.

According to the State Emergency Management Agency (SEMA) the disaster has ravaged 19 local government areas of the state.

The flood has been described by the state government as a “crisis situation” and the Secretary to Adamawa state government, Aris Thimnu, Monday in Yola, called on the National Emergency Management Agency (NEMA) and the federal government to come to the aid of the state.

Mr. Thimnu said more than 50,000 persons have been rendered homeless. He said that the state government was “taken unawares by the floods” as the Cameroonian authority informed the state government of its intention to release excess water from the Lagdo Dam really late.

“About 50,000 households have been affected by the flood and we were taken unawares because normally, authorities in Cameroon informed us ahead of time so that we can order for evacuation and be prepared for any emergency, but this time information came very late,” he said.

The SSG also said the state is cash strapped to provide prompt emergency relief adding that the immediate solution is for residents on water ways to move to safer grounds.

The state government promised to support all those willing to relocate and asked the Council administrators to brace up for more challenges, as indications emerged that the Cameroonian authorities will release more waters from the dam soon.

The Adamawa state government also called on the Federal Government to intervene as strained bilateral relations with Cameroon is preventing the receipt of compensation from Cameroonian authorities which can help cushion the effect of the destruction.

The Executive Secretary of SEMA, Shadrack Daniel, said the agency was involved in enlightenment efforts prior to the flood disaster. He added that the floods arising from the opening of Lagdo Dam have left several thousands homeless.

The flood has also disrupted socio-economic activities and led to the loss of agricultural produce and farmlands estimated to run into several millions of naira. The worst hit areas are communities located along the river Benue and Taraba state.

Although SEMA said it is yet to quantify the loss occasioned by the flooding, the agency said it has received reports which confirmed that several villages have been ravaged by the floods in 13 local governments’ areas of the state located on the trough of river Benue.

When a PREMIUM TIMES reporter visited parts of Yola North and South, he saw several houses submerged in the flood. Some roads were also overflowing with water.

Residents of Yolde Pate community, 80 units settlement along the popular Chouchi bridge and Bakin Kogi all in Yola metropolis were severely hit by the flood. Some residents say bodies of their relatives were swept by the flood and are yet to be found.

Jonathan has planted a good seed, By Anthony A. Kila