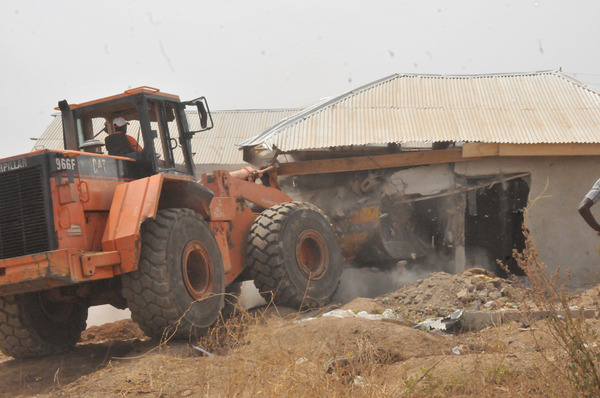 Demolishing a building used to tell the story.

The judge refused to grant an order restraining the FCT administration from demolishing Mpape.

A resident of Mpape in Abuja, Friday Chimezie, has filed a suit against the Minister of the Federal Capital Territory, Bala Mohammed over the planned demolition of the community.

Mr. Chimezie filed the suit, against Mr. Mohammed and the FCT administration, on behalf of 10 other residents of the Mpape.

The Mpape residents want the court to issue an injunction restraining the FCT minister from carrying out the demolition exercise, which is scheduled to begin on Aug. 31.

The residents say the planned demolition of more than 10,000 buildings by the FCT was wrong and would render hundreds of thousands of people homeless.

The hope of the Mpape residents is to be determined by Husseini Baba-Yusuf of the Abuja High Court who adjourned the case, heard on Wednesday, to August 23.

The judge adjourned the case based on a complaint by counsel to the Mpape residents, Ayodele Gata, that he was only served with the counter motion on Tuesday night.

Mr. Gata also sought an order from the court that would restrain the FCT from demolishing Mpape pending the determination of the suit.

Mr. Baba-Yusuf however refused to grant the order.

“I think it is wise at this point to refrain from making any order that would be interpreted to mean that the reliefs sought by the applicants have been granted,” he said. “On the basis of this, I make no order of restraint against the defendants.”

However the judge made a statement, which appeared to be restraint on the Mr. Mohammed and the FCT administration, over the demolition of Mpape

“However, it is clearly the law that, once parties have submitted their grievances to the court, it would be wrong to resort to self-help,’’ Mr. Baba-Yusuf said

He also ordered counsels to all parties to ensure that they serve each other with all the court processes before Wednesday, Aug. 23.