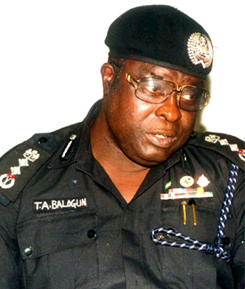 Tafa Balogun, former IG of Police was convicted of graft

After heading a federal police, former IGPs want the force to remain in federal control.

State police would only be an evil tool for state governors, retired Inspectors-General of Police (IGPs), who met with President Goodluck Jonathan at the State House , warned on Tuesday.

The retired police bosses said they were disturbed by the call for the creation of State Police from certain Nigerians.

“We are of the opinion that the clamour is not in the interest of this nascent democracy,” the IGPs who headed the police force, during the period it gained its infamous reputation as the most corrupt government organ in Nigeria, said.

The retired Inspector Generals, some of whom later sought political offices, said the political climate in Nigeria would hand state governors a whip to torment their opponents.

They argued that even developed democracies like the United Kingdom and the United States of America that operate state and local police, are returning to a more centralised national police in dealing with contemporary challenges like terrorism and cyber crimes.

Rather than back state policing, the retired police bosses asked the president to re-invigorate the intelligence and investigative arm of the police force to enable it cope with the current challenges

The retired police chiefs also requested full fiscal autonomy for the police, and an increase in funding for the force.

Some critics have said that even if the funding for the present police force were increased, the level of corruption in the force would stall the proper utilization of its funds. Often, high ranking police officers are accused of bribery, deep corruption and public funds mismanagement.

At least, one of the retired police bosses who met with the President, Mr. Balogun, has been convicted of graft. Mr. Balogun was subsequently handed a six months jail term and asset forfeiture, in 2005.

Some of the others, like Mr. Yusuf, Mr. Ehindero, and Mr. Okiro have either been investigated, or prosecuted for corruption while in office as police bosses.

The retired IGPs also asked the president to solve the problems associated with accessing retirement benefits by ex-officers as well as the mismanagement of the police pension scheme.