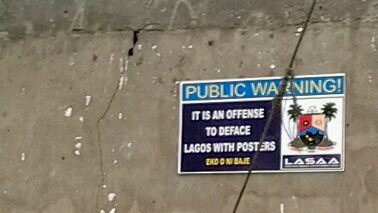 The Lagos State Government says it will disgrace organisations that paste posters indiscriminately in the state.

In an exercise aimed at exposing sponsors of posters in the State, Lagos State Signage and Advertisement Agency (LASAA) says it will embark on a “name and shame” exercise since persistent offenders have become “unrepentant.”

60 per cent of posters in Lagos State are pasted by educational and religious institutions, the agency said.

“We are ready to name and shame erring offenders because they have shown no remorse,” George Noah, LASAA Chief Executive Officer, said.

Mr. Noah added that LASAA has compiled the list of companies to be named in the upcoming “name and shame” publication.

In July, LASAA deployed public notices around the city which read “Don’t mess with Lagos, Pasting of posters is illegal.”

Mr. Noah said that although the campaign generated a lot of attention and success, there is need to “take it to another level.”

“We believe the fight against poster in Lagos is total and we will deploy all our resources to ensure our city is clean,’’ he said.