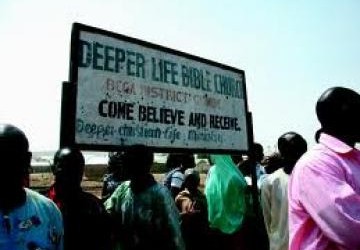 Security officials in Kogi State have been accused of brutality in the course of fishing out the culprits of last week’s Deeper Life Church shootings.

The Police in Kogi State have said that only 16 suspects are in custody over the August 6 killing of 19 worshippers at the Deeper Life Bible Church, and the killing of two soldiers at Okene town on August 7.

Simon Ile, the Public Relations Officer of the State’s Police Command, who confirmed this to newsmen, on Sunday in Lokoja, said that investigations have commenced to determine the level of culpability of those arrested.

He said those who have nothing to do with the crisis will be set free. He also confirmed that the immediate past Chairman of Okene Local Government, Yahaya Karaku, was among those being detained, but said that the man was not shot in the leg as rumoured.

The police spokesman said that all the suspects are in good condition, adding that no lawmaker has been detained.

Also speaking on the security situation in Okene, the Commandant, Command Army Record, Lokoja, Alphonsus Chukwu, refuted the allegation of brutality by soldiers on duty in the town.

“I will be at Okene tomorrow, Monday, to confirm some of these allegations, but the commander on ground assured me that there was nothing like that,’’ Mr. Chukwu said.

However, residents of Okene have continued to raise alarm over the activities of some of the soldiers and mobile policemen deployed by the government to keep the peace. They allege that the security agents have been preventing them from going about their legitimate businesses.

In a related development, the Deeper Life Bible Church says it is still mourning its members who were victims of the Okene killings.

“The church is grieving. The leadership of the church is touched and is grieving too. But what has happened will not deter us,” said the Church Secretary, Jerry Asemota.

Mr. Asemota, who spoke at a combined worship service in Lagos, on Sunday, said that “the enemy is doing everything to discourage our pastor but we will pray harder that he will not be discouraged.”

The Church Secretary, who is also a pastor, advised members not to take the law into their hands saying the church “will take up the weapons of Truth which is the word of God and the weapons of prayer that will bring us victory.”.

He said the Okene killings was not the first time its members would be targeted by terrorists, stating that six of its members in Mubi, Borno State, were killed by gunmen in 2011.