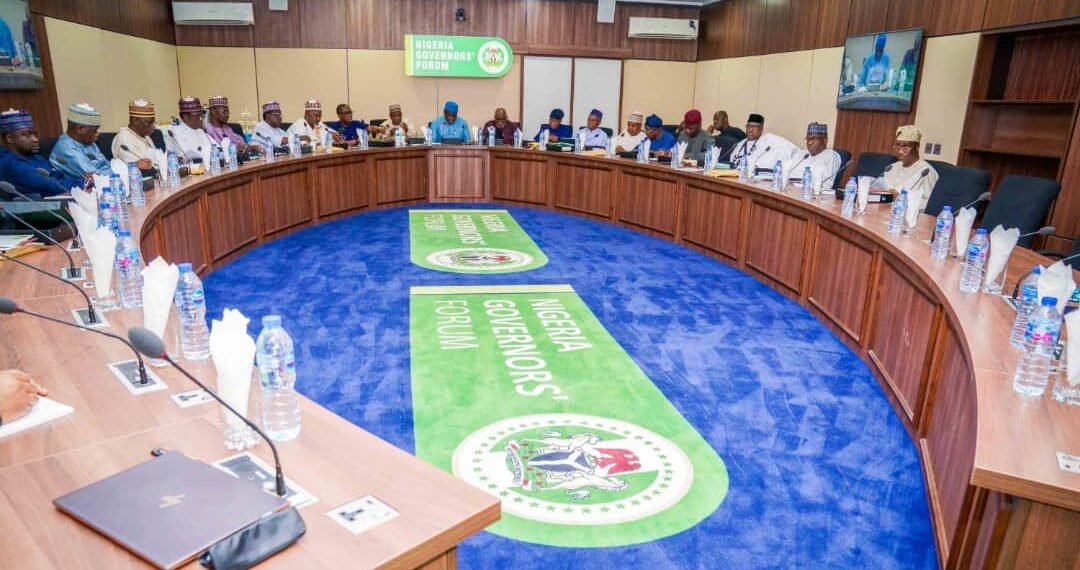 The federal government had blamed the governors for prioritising the construction of infrastructure such as bridges and airports in cities and state capitals over improving the lives of the people in rural communities.

Nigerian governors have blamed the rising poverty in the country on insecurity.

The governors also blamed the federal government for failing in its primary responsibility – securing the lives and properties of Nigerians.

This was contained in a statement by the Director of Media for the Nigerian Governors Forum (NGF), Abdulrazak Barkindo.

He blamed the governors for prioritising the construction of infrastructure such as bridges and airports in cities and state capitals over improving the lives of the people in rural communities.

The National Bureau of Statistics (NBS) earlier announced that over 133 million Nigerians live in poverty – this figure represents 63 per cent of the nation’s population.

In its “Nigeria Multidimensional Poverty Index”, the NBS said over half of the population who are poor cook with dung, wood or charcoal, rather than cleaner energy.

The governors who described as surprising Mr Agba’s comment, also said his assertion is preposterous, without any empirical basis and far from the truth.

They said the federal government which is responsible for the security of lives and property has been unable to fulfil this covenant with the people thus allowing bandits, insurgents, and kidnappers to turn the country into a killing field, maiming and abducting people, in schools market squares and even on their farmlands.

“Today, rural areas are insecure, markets are unsafe, travel surety is improbable and life for the common people generally is harsh and brutish.”

The Forum wondered how a defenceless rural population can maintain a sustainable lifestyle of peace and harmony when their lives are cut prematurely, and they wallow permanently in danger. And why a minister “whose government has been unable to ensure security, law and order have the temerity to blame governors.”

In the statement, the Forum noted that Edo and Akwa Ibom State had responded to the minister’s comment.

Akwa Ibom State said poverty and unemployment in a country is determined by its economic policy, which is set, normally by the central government nationally.

The state maintained that the federal government cannot abdicate its responsibility by blaming states and asked how economic policies in a state drive the dollar which determines almost every aspect of national existence.

Edo State reeled out the projects it implemented which are targeted at alleviating poverty among its people.

The minister, the NGF said, is perceptibly oblivious of them (the projects) because many other states have been implementing pro-poor programmes in their domain.

The governors went ahead to point out the irony in Muhammadu Buhari-led campaign message in 2019, where he promised to take 100 million Nigerians out of poverty.

“Today, records show that more than 130 million Nigerians are living below the globally accepted poverty line of a dollar a day, ” they said. “Under the current administration that Mr. Clement Agba is minister, the national cash cow, the NNPC, had failed to remit statutory allocations to states in several months.”

They said the situation had compelled governors to rely on other sources of revenue like, the SFTAS programme and other interventions anchored by the NGF, to fund states activities while monies budgeted for such federal ministries as Agriculture, Rural Development and Humanitarian Affairs are not being deployed in the direction of the people.

“So, where is the Minister getting his unverified facts and figures from? It is important to mention here that only this week the House of Representatives asked the Minister of Humanitarian Affairs, Hajiya Sadiya Umar Farouk, to quit office if she was not ready to do her work of alleviating poverty in the land. This, in other words, is a resounding vote of no confidence on the ministers among whom Mr Agba serves.”

While NGF said it does not indulge in “joining issues with the Federal Executive Council”, being a non-partisan organ, it stated that its primary mandate is to partner with all well-meaning institutions, concerns, MDAs, and individuals for the progress of the Nigerian people.

The Forum also said governors have today shown greater responsiveness to the yearnings and aspirations of their people, and these vary from one state to another. It said the opinion of one minister, based on a survey of 56,000 households in a country of 200 million people can never diminish the good work that 36 pro-poor minded governors are doing.