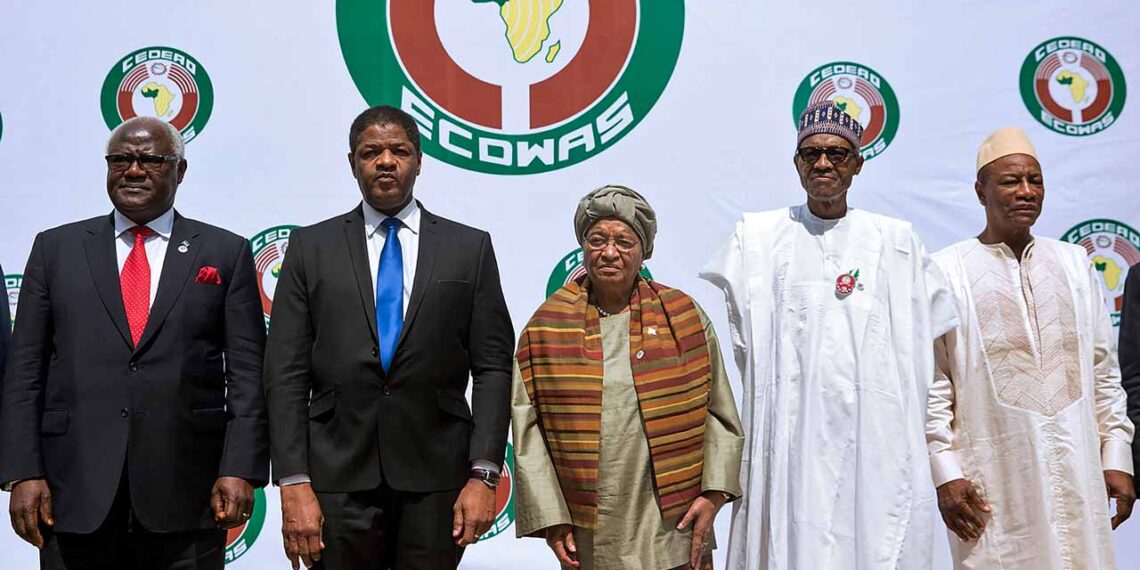 Buhari with some West African leaders

West Africa is also in need of a successful election to counter the prevailing gloom of four attempted coups this year alone.

Towards the end of October, foreign missions began issuing terror alerts to their citizens in Abuja. Several missions began evacuating staff and citizens, while some establishments temporarily closed down as a result.

The Nigerian government has sought to dispel the reports and reassure citizens, but this points to the increased level of investment that the international community has in Nigeria – from diplomatic missions to citizens who live and work in the country. It is why a key part of this election is looking at the impact it will have on the foreign policy considerations of Nigeria’s neighbours, allies and projects that it will seek to embark on. This is because the nature of politics around the world is such that no action or incident is in isolation.

Recent developments have emphasized this point – the war between Russia and Ukraine continues to play a part in the price of oil and even export prices. The impact of government decisions has now translated to monitoring elections to see what can be gleaned from the policies and proposals of party candidates. However, the upcoming elections also offer other important considerations to factor in when analysing news and looking at government policies.

Looking across the neighbourhood

West Africa is also in need of a successful election to counter the prevailing gloom of four attempted coups this year alone, with two successful in Burkina Faso alone.

In the 23 years since Nigeria resumed a democratic form of governance, there have been 30 coups in the region and 17 of them have been successful. As a result, Nigeria’s elections are an important event in the region that seeks to reassert democratic principles and stem the tide of unconstitutional transfers of power.

Similarly, a contentious outcome can also lead to a strong displacement issue and significantly affect migration patterns and trade arrangements in the region. The next administration will likely have to deal with an increased trade area through the African Continental Free Trade Area (AfCFTA) and ensure that Nigeria’s significant population and industries are able to leverage, and be leveraged, to ensure the trade bloc’s success.

Similarly, Nigerian troops have been at the forefront of many peacekeeping deployments around the world – and especially in the region. These concerns would ordinarily be on the plate of the next president, but the negative implication of a contentious and divisive election will not only have consequences for Nigerians, but the region as well.

The increasing dependence on technology in this election also highlights how susceptible and vulnerable the election is to foreign policy interests. The Independent National Electoral Commission (INEC) revealed that there were attempted server hacking attempts during the recently conducted off-cycle governorship elections in Ekiti and Osun, citing that some hackers were as far as Asia.

While the confidence of the INEC Chair in their precautionary measures is reassuring, it also serves to highlight how key these elections will be to foreign interests. This leads to strong concerns around fake news and concerted campaigns to discredit the elections. Some citizens and media platforms unwittingly engage in misinformation, which is when fake news is peddled unintentionally. However, some groups actively carry out disinformation campaigns, which is when falsehoods are intentionally directed towards an aim. This is, however, not a new addition to our elections.

The Centre for Democracy and Development (CDD-West Africa) has been actively tracking fake news reports, especially around elections, and has often reflected them in its reports. For example, on the eve of the Ekiti State governorship elections this year, a ‘withdrawal’ message from the Social Democratic Party (SDP) candidate, Segun Oni, in favour of the People’s Democratic Party candidate was widely shared on social media. Despite efforts of many groups to fact-check this development, it is impossible to know the true extent of how this might have affected the elections. And while this point does not in any way seek to delegitimise the election, it definitely provides concern for ensuring a free and fair process.

Lastly, there have been clear reports of foreign groups actively sponsoring disinformation campaigns and spreading illiberal influence in the region. In a recently released report titled ‘Illiberal Influence Fuels Disinformation’, CDD Director Idayat Hassan and freelance researcher Kyle Hiebert look at the rise in external actors in the disinformation space in West Africa. Some countries have actively promoted favourable views about authoritarian regimes to counter narratives after coups or to promote a sense of support for a new dictator.

Others have sought to destabilise governments by spreading news to discredit governments, with the aim of encouraging a change in power. These are through targeted reports, sponsoring media publications and even bots on social media. Now more than ever, it is important to vigilantly check the source of information and news, especially as it concerns one of the most important civic responsibilities a citizen can take part in – electing leaders.

This is one group of foreign actors that should be actively incorporated in decisions concerning Nigeria in the future, and that is the Nigerian diaspora. Many citizens are moving abroad to seek opportunities abroad in response to difficult economic and security concerns at home. At the moment, this is largely a negative effect because of the talent and workforce being lost. However, this group still actively contributes to the country.

Diaspora remittance to Nigeria is a significant addition to the economy, running into billions of dollars a year. Some candidates have rightly sought to engage with these citizens since this is still home. As a result, foreign investment in our elections does not necessarily have to be negative. But it is still important that as active stakeholders in our democracy and our elections, we make a concerted effort to check against plans to destabilise our elections – both at home and abroad.