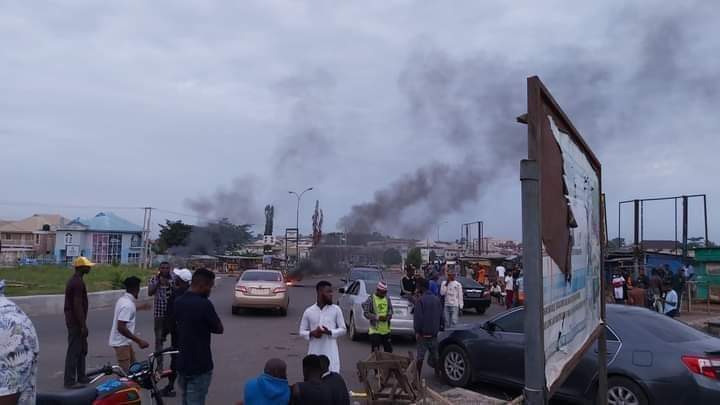 The protesters accused the EFCC of harassment.

There was pandemonium in Osogbo, the capital of Osun State, on Tuesday, as suspected internet fraudsters, popularly known as ‘Yahoo boys,’ blocked major roads to protest alleged indiscriminate arrests by operatives of the Economic and Financial Crimes Commission (EFCC).

PREMIUM TIMES gathered that the protesters, who were said to be ‘Yahoo boys’, set up bonfires at Lameco Junction, along Osogbo/Ilobu road.

The Lameco Junction area is known to be inhabited by youth who allegedly engage in internet fraud.

They also obstructed vehicular movements around Osogbo/Iwo road axis in the state.

They alleged that the EFCC officials have been raiding their homes and arresting some of their colleagues.

Our correspondent obtained various pictures of the protesters with various inscriptions such as “stop arresting us,” and “stop robbing” us among others.

This is not the first time such a protest would take place in Osogbo.

A similar protest against the EFCC took place in February when youth, suspected to be internet fraudsters, blocked the Ilesa-Osogbo express road.

When contacted about the unrest in the state, the spokesperson for Osun State Police Command, Yemisi Opalola, sad operatives were making efforts to restore normalcy.

“We have been managing it since the early hours of this morning. It is under control please,” she said in a WhatsApp response.

The spokesperson of EFCC, Wilson Uwujaren is yet to respond to PREMIUM TIMES calls and text messages as of the time of filing this report.