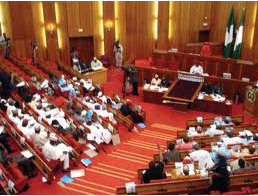 A fresh bribery allegation emerging from the ongoing police pension corruption trial, where National Assembly members have again been accused of taking bribes, has unsettled the legislature and the lawmakers are scrambling to dispel charges they illegally received N8.9 billion of pension money.
A former Director of Police Pension Fund, Esai Dangabar, standing trial alongside five others for misusing N32.8 billion police pension funds, has said in a filed statement, that part of the money were shared among government officials and two committees of the National Assembly overseeing pensions.
The statement dated February 14, 2012, and made to the Economic and Financial Crimes Commission (EFCC) said the lawmakers, who are currently staging a separate investigation into the pension scam, were given part of the N8.9 billion withdrawn between January 5, 2009 and December 23, 2009.
The amount was to facilitate the passage of the police pension fund’s budget passed by the lawmakers that year, Mr. Dangabar stated.
“The said sums of money mentioned above were used for the payment of police retirees,” Mr. Dangabar said in the statement, but also claimed
“However, some amounts were also used for public relations to members of the Police Pension Committee of the National Assembly.”
In a separate statement he made two days later, Mr. Dangabar claimed officials from the Accountant-General Office and the Auditor-General Office benefitted from the split.
After initial reaction on Wednesday after the allegations became public, the senate issued a statement on Thursday, where it rarely, speaking too for the House of Representatives, denied the accusations.
Spokesperson, Enyinnaya Abaribe, dismissed the charges as “pack of lies” and attempt at blackmail.
“We suspect that the individual that made the allegation deployed the unfortunate tactics as a desperate ploy to blackmail the National Assembly and hoodwink the Nigerian public as an odious cover in the light of the sad revelations made in the course of the hearings,” Mr. Abaribe said.
“The senate therefore challenges this individual to be courageous enough to name those he bribed.”
The allegations bring another dimension to a string of revelations and bribery accusations the two chambers have witnessed in the past one month at separate investigations.
While former members of House committee-Capital Market- are facing an in-house inquiry being for allegedly demanding N44 million bribe, the senate committee on Establishment probing the pension fraud has accused a government-named task team of offering bribes to its members.
The Task team, headed by Abdulrasheed Maina, has denied the allegation but has in return accused the lawmakers’ investigation of bias.