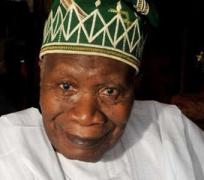 The former administrator of the defunct Western Region, Moses Majekodunmi, is dead, the Eagle Online is reporting this morning.

He died at the St. Nicholas Hospital. where he was chairman.

Mr. Majekodunmi was a senator in the First Republic.

From the legislature, he was appointed a Federal Minister of State (Army) and later the Minister of Health.

He was appointed sole administrator of Western Region in June 1962 after a political crisis in the region, holding office in place of the Premier Samuel Akintola until December that year.

The crisis was due to a power struggle between Mr. Akintola and the former Western Region Premier and leader he opposition Obafemi Awolowo, which sparked violence in the House of Assembly.

After nolmacy was restored, Mr. Akintola resumed office on January 1, 1963.