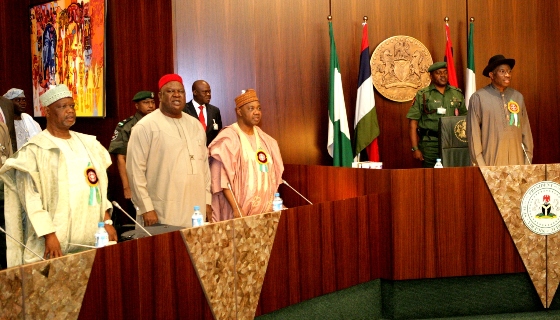 The Goodluck Jonathan administration is confident the living standard of Nigerians immensely improved between December last year and now, despite a devastating fuel price hike that skyrocketed living cost, and sparked street protest early this year.

Since increasing petrol price from N65 to N97 in January, prices of goods and services have soared by as much as 50 per cent or more, leaving Nigerians to pay more while their earnings remained largely the same.

Four months into the new price regime, analysts have said the country’s poverty level has leapt forward while the gap between the poor and the rich has widened.

But citing a report of the Islamic Development Bank on Wednesday, Minister of state for finance, Haruna Ngama, said Nigeria’s economy was performing superbly and had translated to improved conditions of living for the population.

“The standard of living of the people in Nigeria has actually improved as a result of the GDP growth rate,” the minister said after the weekly federal executive council meeting in Abuja.

“As at December, 2011,” he added, “with our income per capita growing from $1,200 to $1,400, this has actually moved us from low income country to Middle Lower income country, as per World Bank classification.”

The IDB rating placed Nigeria as the third fastest economy in the world ahead of China and Mongolia, with gross domestic products (GDP) growing at 7.68 per cent, 8.4 per cent and 14.9 per cent respectively.

The rating had been tabled before the council meeting which President Jonathan chaired, the minister said.

Mr. Ngama said the rating was a “significant development” as it does not only show the growing investors’ confidence in Nigeria, but also indicative of Nigeria being on track to achieving its Vision 20:2020 aspirations to emerge as one of the world’s top 20 economies in the next eight years.

He also said in line with the projections of the IDB, the rating is even truer against the background that the economies of most of the 56-member countries competing with Nigeria are not moving at a faster rate, meaning that Nigeria is soon to become the fastest growing economy in the world.

“Today in council, I presented a report on the presentation made at the 37th annual general meeting of the Islamic Development Bank (IDB),” he told reporters at the end of the meeting in Abuja. “The bank has 56-member countries and at its annual general meeting, each country is expected to present a report on the economic development in the country.

“The aim is to educate ourselves about what is happening in our countries.

“In the case of Nigeria, our report was actually the best. For the year, for the quarter, which ended on 31st December, 2011, only about 46 countries have actually submitted their data, and Nigeria was third in terms of GDP growth. We recorded a GDP growth of 7.68 per cent in real terms, and this is largely due to growth in the non-oil sector.

“The previous year 2010, the GDP growth was 8.4 per cent, but last year, it dropped to 7.68 per cent, because we had a negative growth in the oil sector. So, it means that the non- oil sector is actually resilient and strong enough to carry the economy forward with or without the oil sector.

“This actually placed us as the third fastest growing economy in the world, the first being Mongolia with 14.9 per cent real growth rate, then China with 8.4 per cent in real GDP growth rate, followed by Nigeria with 7.68 per cent.

“But the more important story out of it is that as a nation, we have our vision 202020. We have the objective of having one of the world’s strongest economy by the year 20:2020. All the other countries apart from China that are ahead of Nigeria are growing at a slower rate than Nigeria. When those ahead of us are growing slower, it means that in the next eight years, we will achieve our objective of being one of the strongest economies in the world.

“As at last December, our total GDP was more that N10trillion and that is a growth that is unprecedented despite our challenges.”