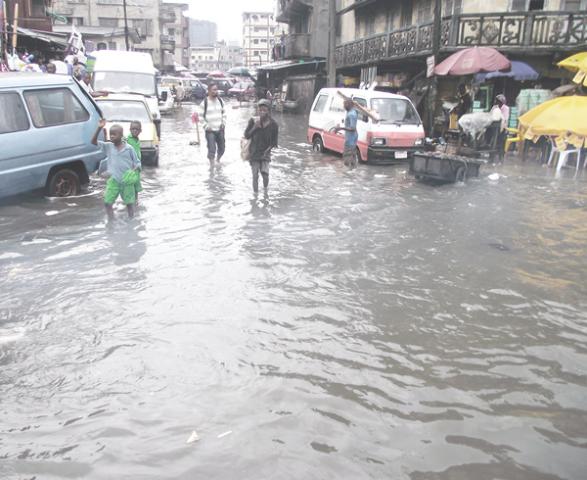 In Adamawa State, the heavy rainfalls caused floods that killed two people and ravaged properties worth millions of naira.

Some residents of the Gwagwalada Area Council of the Federal Capital Territory (FCT) on Wednesday, called for the intervention of the National Human Rights Commission (NHRC) over flooding which they say is caused by Dantata and Sawoe Construction Company.

Some affected residents, who spoke to the News Agency of Nigeria (NAN) in Gwagwalada said that property worth millions of naira were destroyed due to the activities of the company.

Adeniyi Oduneye, a victim, accused the company of creating an artificial lake in the area without providing a channel through which the water could be discharged.

He said that the flooding was envisaged and communicated to the company before the rains came, adding that the area had not witnessed any incident of flood in the 15 years that he has lived in the area.

According to him, property ranging from electrical appliances, mattresses, kitchen equipment, foodstuff, documents as well as air conditioners, were submerged in the flood water for more than 14 hours.

Mr. Oduneye said that his property remained in the flood throughout the night due to failure of the company to respond to calls by residents to open up the lake it created in the area.

Okenwa Ifegwu, a victim and Civil Engineer, said that the incident occurred on April 1 at about 8 p.m., adding that he was able to save some his properties because he was at home when rains started.

“We sensed the problem immediately the lake was created and our advice was for them to open up a channel for the water to have its way but they ignored our observations, telling us that they know when it will rain.

“They actually came the next morning after the incident to open up the artificial lake and assess the level of damages, promising to get back to the victims who could not sleep in their houses that night.

“We have not seen any of the company’s official since then, and when I got in touch with the manager, he said the matter had been channeled to the legal department of the company, and that he had no business with the victims.”

In his reaction, the Giri Site Manager of the company, who refused to disclose his name in a telephone interview with NAN, declined comments but stated that the matter had been directed to the legal unit of the company.