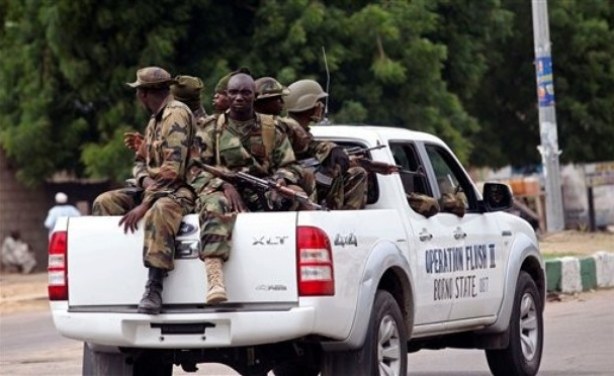 The Joint Task Force (JTF) said on Monday three members of the Boko Haram sect were shot and killed, while two others were arrested in Miaduguri in a raid in the area.

JTF Spokesman, Sagir Musa, said in a statement in Maiduguri that both those killed and those arrested were suspected to have been the masterminds of the killing of civilians at the popular “Monday Market” last Wednesday in the area.

Musa said the feat was accomplished during “Operation Restore Order” (ORO) embarked upon by the task force.

He said that members of the sect were killed after the JFT raided their hideout in Bula-Bulin area on Sunday.

“Information received from a good Samaritan revealed that the Boko Haram terrorists responsible for the killing of some civilians in Monday Market on April 4, were located in Bula-Bulin area of Maiduguri,” the statement said.

“Consequently, the area was cordoned off and searched in the early hours of Sunday, which resulted in an attack on their hideout, leading to the killing of three while two were arrested.”

Musa said items recovered from the victims during the raid included one FN rifle, two locally made pistols and 185 rounds of assorted ammunition were recovered during the exercise.

In a separate incident, he said an Improvised Explosive Devise (IED) discovered at Kwanar Yobe at about 3.30 pm on Monday was destroyed by the bomb disposal experts shortly after discovery