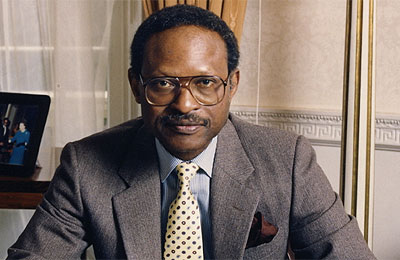 A  former Secretary-General of the Commonwealth of Nations, Emeka Anyaoku, has said that Nigeria must return to true federalism if it must make progress.

Mr. Anyaoku made this remark in Lagos at the 4th Annual Bola Tinubu Colloquium, an event organized to mark the 60th birthday of a  former Lagos State governor.

“I do believe that a true, rather than our current unitarist federalism, will better promote peace, stability, and development in Nigeria,” said Mr. Anyaoku.

“There can be no doubt that Nigeria was making progress in national development in the early years of its independence when it practiced true federalism of four regions with more extensive powers deployed from the centre to the regions.

“Those were the days of the significant export of groundnuts, hides and skins, and the tin ore from the North; of cocoa from the West; of rubber from the Mid-West; and palm produce and coal from the East of Nigeria,” said Mr. Anyaoku.

The colloquium, which held under a heavy police presence at the Eko Hotel and Suites, was a gathering of political heavyweights across the country.

A bent Maitama Sule, a presidential candidate in the 1979 election, stepped into the venue about 30 minutes late and the praise singers, stationed at the entrance, rolled out their drums.

The octogenarian struggled to shuffle a few feet as he was helped up the three-step staircase that led into the venue.

The celebrant, Mr. Tinubu, arrived over an hour late and proceeded to give a high five to Mr. Igbinedion and other top politicians at the event.

Mr. Anyaoku, the chairman of the occasion, noted that he accepted to honour the invitation “because of what the man in whose honour it is organized represents.”

“Bola Tinubu was of an effective advocate and a dedicated activist for the return of democracy and restitution of Chief M.K.O Abiola’s presidential election in Nigeria,” said Mr. Anyaoku, who arrived 15 minutes before the 3 p.m scheduled time of the event.

With Ade Ipaye, the Attorney-General of Lagos State; and Abike Dabiri-Erewa, a member of the House of Representatives; introducing the speakers for the day; the colloquium delved into graphic presentations of some landmark achievements in the state from 1997 till date.

“Hardly anybody gave us a chance, but on reflections, it was an extremely daunting challenge,” said Yemi Cardoso, Commissioner for Economic Planning and Budget during Mr. Tinubu’s administration.

In his presentation ‘Public Finance in an Emerging Megapolis,’ Wale Edun, a former Commissioner for Finance, noted how the state grew its internally generated revenue from N600 million in 1999 to more than N15 billion in 2011.

Leke Pitan, a Commissioner during the celebrant’s administration, spoke at length on the reforms in the education and health sector since 1999; from provision of free anti malaria and ante natal drugs to building “mega” schools before it was cut short by the audience applauding him in mid speech.

Yemi Osinbajo reminisced about his first meeting with Mr. Tinubu in April 1999 and the state’s various litigation with the federal government.

“The creation of the 37 local government councils in 2002 was probably the defining moment in the struggle for true federalism,” said Prof. Osinbajo, a former Attorney-General of Lagos State.

Rauf Aregbesola, the Osun State governor, who periodically threw the audience into fits of laughter while speaking on ‘Politics: The People First’ called on the Action Congress of Nigeria to “throw out” whoever is not ready for the task ahead.

“I would not want to elaborate because when I elaborate, I get myself overworked.

“Our new task is reconstruction of our reclaimed territory,” said Mr. Aregbesola.

The Lagos State governor, Babatunde Fashola, while delivering the last speech for the evening said that the state to enforce the legislation to collect taxes.

The occasion also witnessed the presentation of the book ‘Asiwaju: Leadership in Troubled Times’.

About N50 million cash was realized from the sale of the book at the event, with most of the guest preferring to disclose their donations privately.

The organizers said that the proceeds from the sales would be channeled into a fund, the Bola Tinubu Institute for Good Governance.

While thanking his guests at the event, Mr. Tinubu noted that though any captain can steer a ship, “it takes exceptional leadership to chart a new course.”

Mr. Fashola’s had in his speech said that he had been asked by the lower cadre members of the party to prevail on the celebrant to dispense “justice equally.”

“If there’s no partiality, you cannot be governor yourself,” he told Mr. Fashola.

“Ask them not to give me the task, that I’ll not be able to deliver,” said Mr. Tinubu.

“What I’d done consistently in the past, why would I want to change at 60?

“I’ve succeeded with that behaviour and sorry I’ll not deviate from it.”