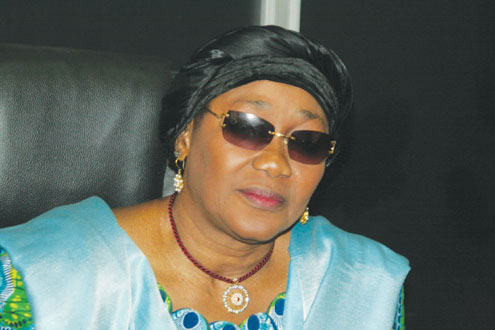 Former head of the Economic and Financial Crimes Commission (EFCC), Farida Waziri, has retained official effects assigned to her office as the commission’s chairperson, four months after she was fired, the House of Representatives committee overseeing the agency said.

Mrs. Waziri keeps an unstated number of vehicles, an accommodation property, and other items belonging to the anti-corruption agency, according to the House committee on Drugs, Narcotic and Financial Crimes.

Mrs. Waziri’s unceremonious removal late last year, was mired in unclear circumstances after a four year spell that was harshly criticized by many as largely unsatisfactory in tackling corruption.

The era was replete with several unresolved high profile cases with only a few convictions to show for. Still, former House Speaker Dimeji Bankole and deputy, Usman Nafada, were charged for corruption under her tenure.

Evidences presented at a recent senate pension management named the former anti-corruption chief as having approved an outlandish foreign trip involving about a dozen of the commission’s operatives for the verification of retirees.

The exercise captured only 20 pensioners after N240 million had been spent.

The House committee said it “discovered” during one its oversight tours that some official items under Mrs. Farida’s former office had not been relinquished since she left office.

“Despite the handing over process you took when you were leaving office, Monday 28th November, 2011 the House Committee on Drugs, Narcotic and Financial Crimes discovered, during one of its oversight visit that you are still in possession of the Commission’s official vehicles, still occupying a residential property belonging to the commission and other government properties,” the committee said in a letter dated March 19, 2012.

“This is in contravention of laid-down government regulations,” the letter signed by the committee’s chair, Jagaba Adams Jagaba, added.

The committee gave Mrs. Waziri two weeks, elapsing April 2, to give up the effects or be summoned by the committee.