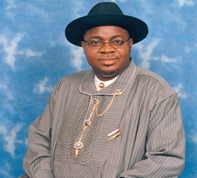 The wife of George Sekibo, the senator representing Rivers East Senatorial District in the National Assembly, has been kidnapped in Port Harcourt.

Mr. Sekibo’s wife, Asime George-Sekibo, was kidnapped on March 22 along East-West road while returning from the University of Port Harcourt.

Sources told the News Agency of Nigeria (NAN) that Mrs George-Sekibo was driving a Hummer, a luxury SUV, along the road when she was ambushed by the gunmen.

NAN learnt that the hoodlums whisked her away with three other women and a baby who were in her company.

“Her jeep was abandoned on the road while the kidnappers took them away in their own vehicle,’’ the source said.

Mr. Ugwuegbulam, however, told NAN that he was yet to receive the details of the incident.

“I have not yet gotten the details of the incident. I am waiting for it. I will furnish you with the details later.”