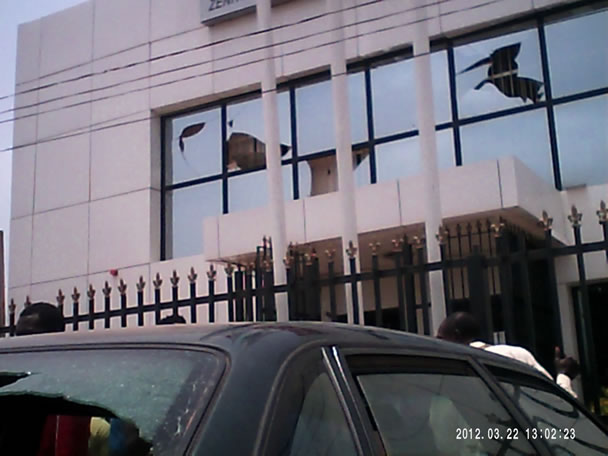 A gang of armed robbers on Thursday staged simultaneous raids on two banks in Ekpoma, Edo.

The robbers carted away an unspecified amount of money during the raids. The thieves reportedly went to the banks, which were few metres away from each other, with sophisticated weapons. They shot sporadically causing residents to flee for safety.

The robbers reportedly gained entrance into the banking halls after using dynamites to destroy the electronic doors of the banks.

An unconfirmed report said that a female hairdresser was killed during raid. An eyewitness told NAN that the robbery lasted about 30 minutes and the robbers exited through the Sabongida-Ora- Ifon Road. Commenting on the incident, Mr Amos Opadoja, the Divisional Police Officer (DPO) for Esan West Local Government Area, said the police succeeded in preventing the robbers from gaining access into the banks’ strong rooms. He said the robbers shot the tyres of the police armoured vehicle and caused the men of ‘Operation Thunderstorm” to beat a retreat. A NAN correspondent reported that the windscreens of vehicles parked closed to the banks were shattered while expended bullet shells littered the area.

UN asks Nigeria to step up fight against corruption