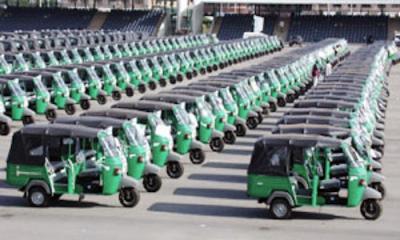 Delta Govt. to purchase 1,000 units of tricycles to replace okada

The Delta State Commissioner for Transport, Benson Igbakpa, says the state government will soon take delivery of 1,000 units of tricycles to replace motorcycles in the state.

He told newsmen on Thursday in Asaba, that the first batch of 500 units of the tricycles had been delivered, and the balance of 500 would be delivered later.

The commissioner said the provision of the tricycles was in view of the state government’s intention to replace commercial motorcycles commonly known as ‘Okada’ due to the menace they constitute in the society.

Mr. Igbakpa also said that this would help to reduce accidents and loss of lives on the highways.

He explained that the commercial motorcycles would be relocated from the major towns to the hinter lands where they would be better utilised.

Mr. Igbakpa also disclosed that the government had concluded plans to build trailer and lorry parks across the state.

He said this would help to decongest the highways as well as indiscriminate parking and also promote safe driving.

The commissioner said that modern maintenance and recreational facilities would be provided at the parks.

Mr. Igbakpa also said that the state government was currently partnering with the private sector under the Public-Private Partnership (PPP) for the provision of necessary facilities and infrastructure for an effective road system.

He said this would help to play a key role in the economic and social development of the state.

According to him, the first phase of the construction of the proposed trailer and lorry parks is expected to be sited at Umunede/ Ekwuoma in Ika North East Local Government Area of the state.

He also disclosed that in a bid to enhance water transportation system and alleviate the suffering of the rural dwellers, the executive council in 2011 fiscal year approved the procurement of 100 big boats and 30 small ones for the rural communities.

Mr. Igbakpa said that the state had started taking delivery of the 130 boats, adding that the boats would be distributed to the people through unions and cooperative societies under a revolving loan scheme.

He also said that the state between 2008 and 2012 embarked on the construction of 21 landing jetties and two waiting sheds in some rural areas across the state.

“In addition, the state government has also approved the construction of seven new jetties at the same areas and work is ongoing in other locations.”

The commissioner said that out of the 28 jetties, nine had been completed.

Water everywhere but none to drink