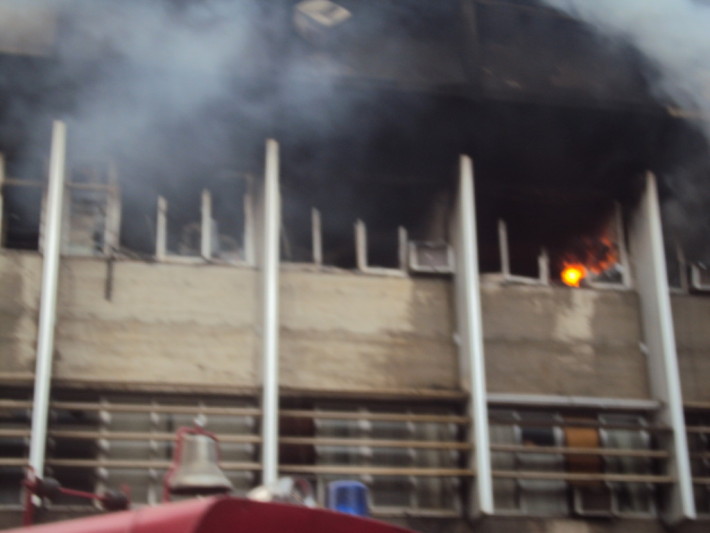 The fire raged for hours

Lecturer, many others injured in Tuesday's UNILAG fire

A few responders, including a lecturer, Tuesday, sustained minor injuries while properties and students’ records were destroyed as fire ravaged the Faculty of Science building of the University of Lagos (UNILAG).

The fire, which started in the general office of the Department of Physics around 6.20 a.m., wrecked considerable damage on the office of the head of department and other offices before it was finally extinguished about four hours later. The fire started at the third floor of one of the HOD’s office and so affected the three other adjoining offices, eyewitnesses said.

According to reports, UNILAG fire service, which arrived at the scene when the fire first began, could not save the situation from deteriorating.

“When we alerted UNILAG fire service, the men came on time but stood downstairs trying to quench the fire without any ladder,” said Andrew  Vincent, a 400-Level student of the Department of Marine Biology, who claimed to have witnessed the start of the fire outbreak.

He explained that although they warned the firemen their approach to quenching the fire would have no effect, they decided to do it “their way” because they “did not want to waste water.”

The firemen were, albeit, able to prevent the inferno from spreading to an adjoining wing of the building which, it was gathered, contained inflammable chemicals.

“It did not take long before we had to intervene because they ran out of water and the fire was by then spreading to other offices,” added Mr. Vincent.

It eventually took fours hours for four fire fighting crews, and many students, with seven vehicles at their disposal to extinguish the fire.

Members of the UBN Fire and Rescue Unit and the Federal Fire Service, who were alerted by anonymous callers, had also arrived the scene.

It was gathered that the school authority officially alerted Yabatech and Lagos State services to help contain the situation.

Students were not left out of the fray as they were seen helping the firemen combat the inferno.

“We could not watch our records burn so we stepped in, it was the right thing to do,” said a student who helped put out the fire.

It was gathered that it was one of the students who was on his way to his hostel after spending the night reading at the facility that first noticed the fire and alerted the security men on guard.

The student, who does not want to be named, said he could have dealt with the threat if the building’s fire extinguishers were not under lock and key.

Officials at the school’s medical center confirmed they treated a lecturer, a few students and a couple of other members of staff for minor injuries they sustained while battling the fire. They, however, declined giving the exact number of those injured.

The concerted efforts of firefighters and students extinguished the fire a couple of minutes after 10 a.m.

UNILAG firemen, although arriving early enough to have been able to save the day, could not prevent the fire from spreading because they had a faulty fire truck and an “impossible” strategy, many students and members of staff complained.

Some of the students called on the authorities to integrate them (students) into the fire service. They argued that it was only reasonable to do so since students have been the first and most effective responders in combating fire especially in recent times.

The Vice-Chancellor, Prof. Adetokunbo Sofoluwe, who arrived at the scene two hours after the fire outbreak declined comments.

A dean (names withheld), who was present at the venue of the incident, was however heard berating the school authority for claiming to be the University of First Choice in words, not in deed.

“This is appalling, and you called this the University of First Choice, first choice indeed.”

The University of Lagos, due to the strides it has made over the years, is regarded as Nigeria’s foremost institution of higher learning.

The school has, however, come under strong criticisms in recent years because it is doing badly on global university rankings – it is not even in Africa’s top 100 anymore.

The fire incident is the second in the university in three weeks.

A mysterious care fire, February 27, had raged for 120 minutes and defied the fire service of the school which was located a mere 150 meters away.

El Rufai back in court in land allocation case