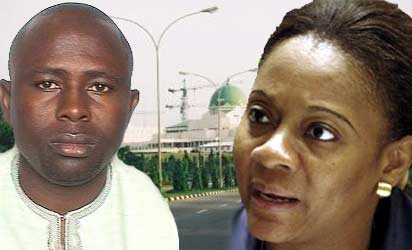 As predicted by Premium Times in a report Monday, Chairman of the House of Representatives Committee on Capital Market, Herman Hembe, has stepped down to pave way for a probe of the coruption allegations against him.

Mr. Hembe says he took no bribe as alleged by the Director General of the Securities and Exchange Commission, Arunma Oteh, but ” worked hard to avoid the offer of such” from SEC DG.

This website had reported Monday that Speaker Aminu Tambuwal was considering an independent probe of the N44 million bribery scandal rocking the House of Representatives, in the run-up to Tuesday sitting of the House.

Reliable sources close to Mr. Tambuwal had told us that Mr. Hembe would be compelled to step down while an independent inquiry is launched into a scandal that has horrified the nation, and shocked even the lawmakers.

Mr. Hembe had met with the leadership of the house over the weekend, insisting he never solicited N44 million as claimed by the DG, those familiar with the matter had told this newspaper.

Ms. Oteh alleged the demand – the first for N39 million and later for N5 million – were made ahead of the ongoing capital market committee public hearing, and the funds were purportedly meant to finance the sitting. House public hearings are funded by the house, and under the sixth assembly, the figure averaged at N5 million for each hearing.