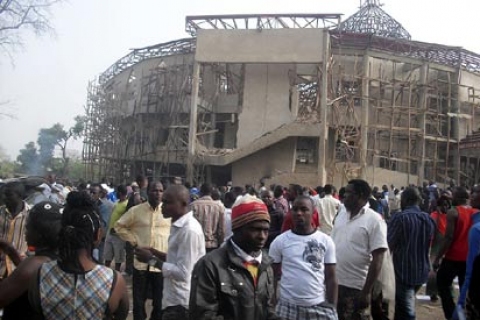 This church in Jos was bombed by terrorists

Worshippers in most churches in Jos on Sunday parked their vehicles outside their church premises in compliance with a directive aimed at checking incidents of suicide attacks during Sunday services.

The News Agency of Nigeria (NAN) recalls that the directive to park vehicles outside churches emerged after a meeting presided over by the Plateau Commissioner of Police, Emmnuel Ayeni.
The meeting had in attendance the representatives of state chapters of the Jama’atul Nasril Islam (JNI) and the Christian Association of Nigeria(CAN).
The situation was as a resut of the spate of suicide bombings recorded at churches in the city on  Sundays recently, as well as its general state of insecurity.
NAN correspondents who visited some churches in the Jos metropolis observed that most worshippers did not park their cars within the premises of the buildings.
At the Living Faith Church on Richards street, even the Senior Pastor, Abel Dingamaji, did not park in his official parking space but parked outside the premises like other members.
At the Mountain of Fire and Miracles Church on Murtala Mohammed Way, worshippers’ vehicles were barred from the premises.
However, the parking lot of the Church of Immaculate Conception, Zaramangada was empty as most people did not bring their vehicles to the church.
The premises of Living Faith Church, Rantya had only 10 vehicles.
The church’s Senior Pastor, Adebusola Olurotimi, later told members that no vehicle would be allowed into the premises as from next Sunday.
NAN also observed that handbags were not allowed into the churches as ladies were directed to drop their bags at the security posts.
They were also advised to enter the church building for the service with only their Holy Bibles and writing pads.
Meanwhile, security was beefed up across the metropolis while men of the military Special Task Force (STF) conducted thorough stop-and-search checks on vehicles, motorcycles and passengers.
This was in compliance with the directive by the STF Commander, Maj.-Gen. Mohammed Ibrahim, who decried the alleged use of military uniform by suicide bombers.
He had consequently directed that everybody, including security personnel, be subjected to rogorous checks to halt the trend.
Consequently, vehicle bonnets and boots were searched while motorcyclists and their passengers were searched by the soldiers to ensure that they were not carrying any explosive device.
Roads leading to the churches were also blocked and diverted by the churches’ security personnel and stern-looking armed soldiers who ensured compliance.
Armoured personnel carriers (APCs) were stationed at strategic locations while men of the STF, Police Force and Nigerian Security and Civil Defence Corps carried out vehicular patrols.
Many churches had also erected barriers and security posts on the roads leading to their premises, while some erected concrete culvert rings around the premises to ward off attacks.
This development however caused serious traffic congestion in the metropolis, thus preventing most worshippers from getting to their churches early in spite of arriving about about an hour earlier.
Attendance in most churches was also low as many worshippers had to turn back, while some others were discouraged from coming for services as a result of the situation on ground.
NAN, however, observed that most of the security personnel were courteous in attending to the worshippers and others.
Speaking on the situation, the Police Public Relations Officer, ASP Samuel Dabai, called for the residents’ understanding.
“This is a quest to check the new trend of insecurity in the metropolis, and we want all residents to show understanding,’’ he said.