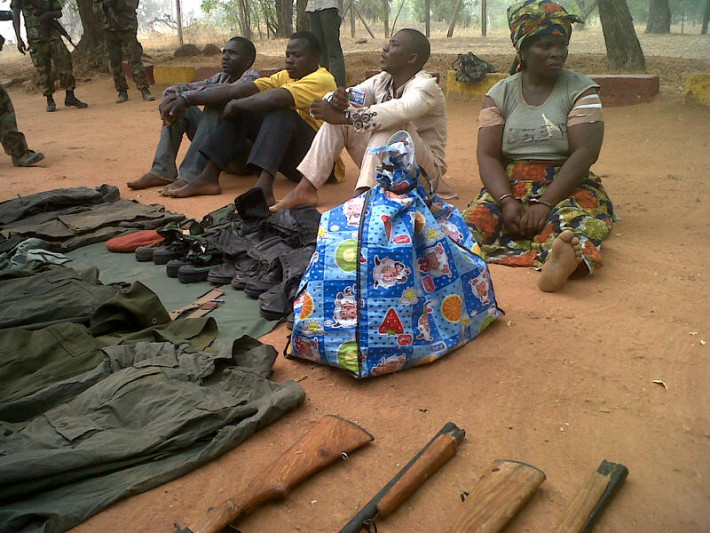 Behold the suspected gunrunner and supplier to military kits to terrorists

The 23 Armoured Brigade, Yola, Adamawa State, has clamped down on a syndicate specializing in gunrunning, and sale of military gear to men of the underworld.

The military says the intercepted cache of arms was heading to Gombe State where one Danjuma Luka, who is now also in police net in Taraba State, was waiting to take delivery of the consignment.

The capture of Mr. Luka by the military followed the arrest of Ms. James, who the military says was making her second delivery of arms, after a previous  successfully operation in February.The brigade spokesperson,  Lieutenant Victor Olukoya said the woman, caught with four double-barrel guns and two pistols, would have gotten away but for  the vigilance and diligence of his men who effected her arrest, putting their counter-terrorism training to good use.

Mr. Olukoya said the officers subjected the sack of garri in the vehicle to a thorough search which he said led to the discovery of the arms.

“The weapons were hidden in that bag of garri and after searching the sack of garri, the guns were discovered, and the men arrested,” Mr. Olukoya said.

The army spokesperson explained that the pastor arrested in company of the woman “is still only an accomplice” and that the police would be left to ascertain the extent of his involvent in the gunrunning scheme.

Also paraded by the army is a police corporal, Reuben Joel, attached to the anti-terrorism unit of the Nigeria Police Force in Aba, Abia State. He was accused of trafficking military and police uniforms to terrorist cells.

Mr. Olukoya said it was amazing that a serving corporal, attached to the anti-terrorist unit of the police command in Abia State, would be involved the illegal  sale of military uniform in far away Adamawa State.

The arrest of Mr. Joel by the army followed the arrest of two persons by the military at a checkpoint in Mubi, who were caught with  ten uniforms and ten pairs of military boots.

After they were interrogated, the men confessed to taking supply of the military uniforms from Mr. Joel, and that they were taking the consignment to Hong in Adamawa State.The  arrest of the uniform traffickers, the army says,  has helped in unravelling incidences of attack on police checkpoints and banks by men clad in military and police uniforms.

“It is obvious that these are the people attacking police checkpoints and banks with regalia of the military and police. It portends that we have desperate people willing to go to any extent to maim innocent lives,” Mr. Olukoya stated.

However, the army has attributed the success of its current operation to a revision of its strategies in combating the increasing waves of attacks by armed groups.

It has therefore appealed to well-meaning Nigerians to cooperate with the military in its determination to rid the country of criminal elements and check the proliferation of arms by submitting themselves to checks at checkpoints.