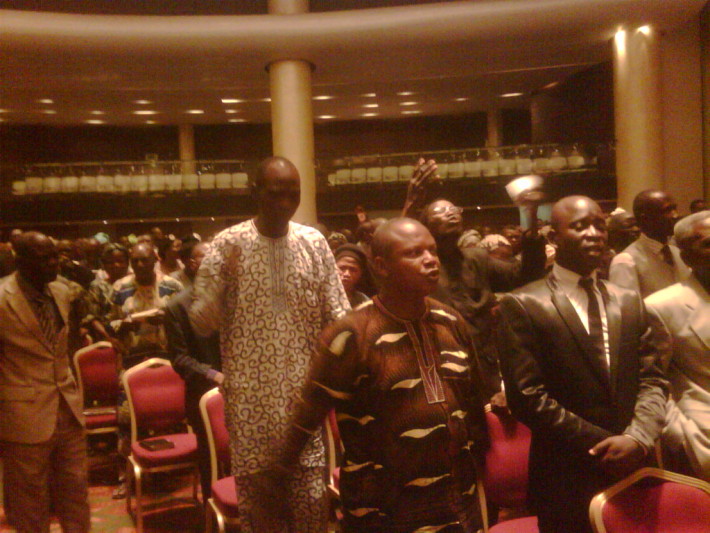 Lagos prayers for Nigeria ... The turnout at the prayer session was impressive

Top Nigerian pastors gather in Lagos in prayer for country

The Pentecostal Fellowship of Nigeria (PFN), Friday, organized a one day prayer and fasting session to salvage the country’s unity, in Lagos.

The six-hour long interdenominational programme tagged ‘Arise… Let us Pray for Nigeria’ was held simultaneously in major cities across Nigeria, the organizers said.

“Today marks a day of the day of a new beginning in our nation,” said Alexander Bamgbola, president of Lagos PFN, in his welcome address.

“This is the first time that the church is gathering to do battle, without guns,” Mr. Bamgbola added.

Some of the top pastors billed to be a part of the programme were “unavoidably” absent.

While both Enoch Adeboye of The Redeemed Christian Church of God and Mike Okonkwo of The Redeemed Evangelical Mission travelled abroad; David Oyedepo of the Living Faith Mission was mourning his late mother.

Ayo Oritsejafor, the President of the Christian Association of Nigeria, who was also slated to be a part of the session was leading the Abuja programme, the organizers said.

“From Lagos to Kaduna, Port Harcourt, even in Sokoto, people are gathered there for this purpose,” said Mr. Bamgbola.

Outside the Expo Centre Hall of the Eko Hotel and Suites, the venue of the programme, police anti-bomb squad van was stationed.

Armed police officers patrolled the grounds while attendees were frisked at they entered the hall.

“One of the major imperatives of this prayer meeting is unity,” said Paul Adefarasin, Senior Pastor at House on The Rock church.

“From my demography, Christendom is at least 65 percent of the national population, but we do struggle because of the divisions amongst ourselves,” said Mr. Adefarasin, who is also a member of PFN’s National Advisory Council.

“There is much anger in certain sections of the country because there has been a three fold shift – ideological, resource, and power shifts,” he added.

Sam Adeyemi of the Daystar Christian Centre called on all christians in the country to unite and “be one.”

“Our methods may differ, our outlooks, appearances, language, but we are still part of one body.

“Our strength is in our diversity, but we shouldn’t allow our strength to be our weakness.

“If the church can’t get it, this nation cannot get it,” said Mr. Adeyemi, who also called on the congregation to “pray against every form of prejudice.”

The preachers were unanimous that the country is on the threshold of greatness.

“What could bring christians on a week day together, not only in Lagos but in Port Harcourt, Abuja, even in Maiduguri?” asked Wale Adefarasin, Senior Pastor at Guiding Light Assembly.

“The church has come together to cry unto God. Nigeria must not be the same again,” he added.

Though the hall was not filled to capacity despite the heightened publicity before the event; turnout was impressive.

Taiwo Odukoya, of the Fountain of Life church, led the prayers for Goodluck Jonathan and other leaders in Nigeria.

“I want to charge you… beyond here pray for Mr. President, the governors, senators, members of the House of Assemblies,” said Mr. Odukoya.

Why I accumulated N30million bill in hotel – SEC DG