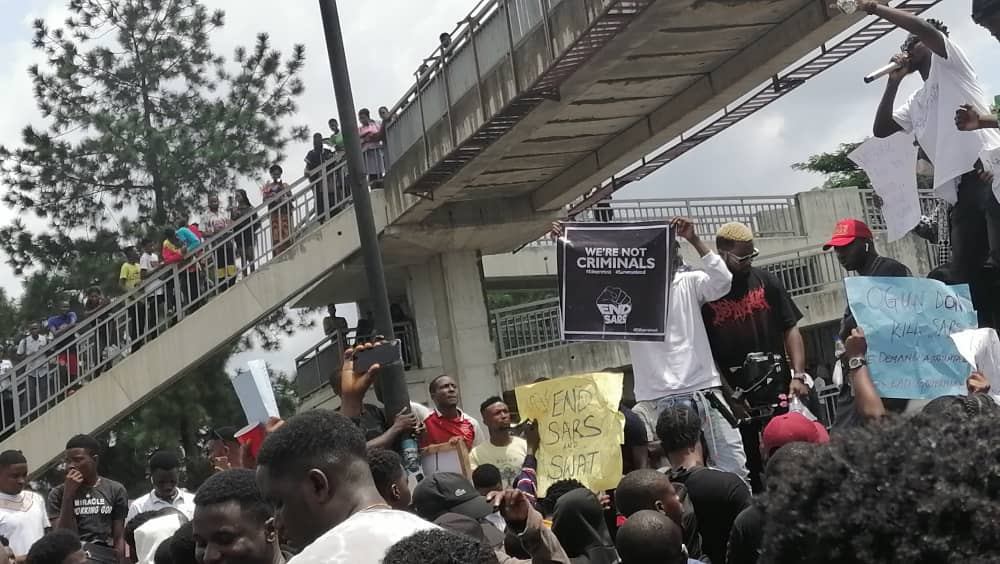 Two people were killed in the Edo State on Friday when thugs attacked #EndSARS protesters who besieged the Edo State House of Assembly, Benin City.

A crowd of #EndSARS protesters dumped a corpse in front of the Edo Government House, Benin City, according to a video posted on Twitter by Channels Television on Saturday.

The corpse of the unidentified man was covered with the Nigerian flag.

PREMIUM TIMES reported how two people were killed in the Edo State on Friday when thugs attacked #EndSARS protesters who besieged the Edo State House of Assembly, Benin City.

It is unclear, however, if the corpse dumped in front of the Edo Government House was that of one of the men killed during the Friday attack by thugs.

The deputy governor of Edo State, Philip Shaibu, was booed when he climbed a podium and tried to address the protesters.

He later stepped down and walked away after the crowd refused to allow him to speak.

“Let’s go, let’s go,” the crowd could be heard chanting in the video as they dropped the body on the ground, in front of the Government House gate, and started walking away.

“This man is a hero,” one of the protesters said of the dead man. “We need a change in this country.”

There have been reports in Lagos and other parts of Nigeria of thugs attacking #EndSARS protesters, while police officers stand by to watch.

The attacks by the thugs, believed to have been sponsored by people opposed to the #EndSARS protests, have had little or no impact in changing the course of the nationwide protests against police brutality and bad governance in the country.