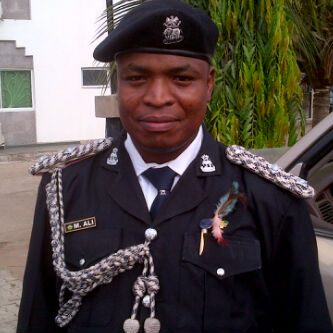 Mohammed Ali...gunned down in daylight

How Boko Haram gunned down top police officer in Yola

Unknown gunmen have killed Mohammed Ali, an assistant superintendent of police and the officer in charge of the police Special anti-robbery force in Adamawa state.

Mr. Ali was known to have led several onslaughts against crime and the rising spate of terrorism in the state. Eye witnesses’ accounts have it that the deceased was swooped upon by gunmen and killed this afternoon at the popular national supply in Yola.

According to the eyewitness, Usman Peter, a car washer man standing nearby the murder venue, Mr. Ali was killed after the hit men confirmed from the deceased his identity and accused him of fighting Allah. He said the hit men shot at the deceased five times and stopped only when the deceased, Mr.Ali, fell to the ground.

Mr. Peter held that accusation by the hit men indicated that Mr. Ali’s killers are members of the dreaded Boko Haram sect.

“Gun men suddenly swooped on him ( Mohammed Ali), asking him – Are you mohammed Ali? and he answered them in the affirmative”. “It was then we heard gun shots, which made everybody to scamper for safety. Mr. Peter said.

Mr. Peter said that when the people at the vicinity heard sporadic gunshots, they ran for protection. “It was then we heard gun shots, which made everybody to scamper for safety”.

Another eye witness, a police sergeant, Fashola Musa said that the armed men came on a motor bike, wielding heavy guns with them.

Mr. Ali was rushed to the Federal Medical Centre in Yola. However, reports from the hospital said Mr. Ali was brought dead on arrival.

Corroborating the hospitals report, Mr.Musa, the police sergeant at the scene of the attacks said that “going by the accounts of the situation it will be a miracle if he ( Mohammed Ali) pulls through. He added that the attacks on policemen in Yola, the state Adamawa state capital had become unbearable.

Presently, Yola has become pensive and the police s in a somber mood. The police are yet to make any categorical statement on the issue.

In the past week, Preminum Times has reported the death of eight policemen in various attacks in Adamawa state.