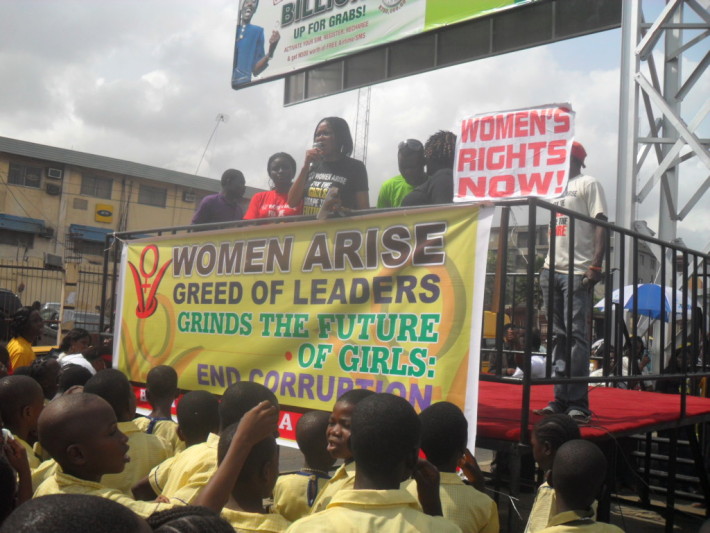 The convener of the Save Nigeria Group, Pastor Tunde Bakare, has called on the Lagos State government to punish teachers in Lagos schools who violate their students and pupils.

Mr. Bakare made this appeal in Lagos, Thursday, at the occasion of the International Women’s Day organized by the Women Arise for Change Initiative.

This year’s event, with the theme ‘Fix the Girls, Shape the Future’, began with a rally at Allen Junction and ended with a procession to the Governor’s Office, Alausa.

“Physically, it was almost impossible for me to be here but I remember that I was only two years old when my father died, and it was my mother who single handedly raised me,” said Mr. Bakare.

“The love she showered on me and her beauty has earned the women folk respect from me all the days of my life.

“If someone had violated my mother, she would not be able to perform that function.

“And I have sisters, I have daughters and I wonder what would happen truly if any of these people is violated. I will definitely commit crime before I know it’s crime,” Mr. Bakare added.

Professor Wole Soyinka, who was expected to participate in the rally, “could not make it.”

The organizers also said that Nollywood actor Desmond Elliot, and actress Kate Henshaw could not also be a part of it because “they came earlier but left because they couldn’t find where to park.”

More than 100 children drawn from various schools across the state took part in the rally.

While speaking on the need to save the future of the children, Femi Aborishade noted that “any child that lacks education has no future.”

“Those who are ruling Nigeria today have destroyed the future of Nigeria,” said Mr. Aborishade, a labour activist.

“Many of those who are ruling us today did not pay school fees. Now they are increasing school fees.

“They must establish free education from cradle to grave,” Mr. Aborishade added, and began chanting ‘free education’ to which the school children chanted along.

Professor Remi Sonaiya, the Coordinator of Getting Good Governance (3G), told the school children to desist from sending nude photographs of themselves to boys.

“Everything is not about how you move your body. There’s more to u than your body,” said Mrs. Sonaiya, who spoke after the musicians who entertained the children sang “Baby whine am… make we go do janglover.”

There was a momentary traffic congestion along Awolowo Way as the procession moved from Allen Junction to the Governor’s Office.

Adejoke Orelope-Adefulire, the Lagos State Deputy Governor, who was standing in for the state governor, Babatunde Fashola, said that the Child Rights Act would provide protection and development for every child in Nigeria.

“The young girls, I believe that the best thing that will have come to their lives is maximum protection and development,” said Mrs. Orelope-Adefulire.

“But some people somehow believe that they can mess them up and abuse them, and they can destroy their lives and nothing will happen.

“I must say categorically and on behalf of the government of Lagos State to say that this is not a business as usual in Lagos again,” she said.

The Lagos State government passed the Child Rights Act into law in 2007.

“I recall when that law was to be passed,” said Mrs. Orelope-Adefulire, who was the Commissioner for Women Affairs at the time.

“I lobbied the House of Assembly maximally to ensure that we passed the law and make use of that law for the development of these young people.”

The Lagos State deputy governor, while calling on non governmental organizations to partner with the state, appealed to parents to report child abuse cases to relevant authorities.

“We are ready to partner with any organization in Lagos for the maximum protection of our young people, especially the girl child, and for their development,” said Mrs. Orelope-Adefulire.

“I want to appeal to our parents, if your child is abused, raped; speak out, let us know. It is when you speak out that they can prosecute the offender and bring them to justice.

“If you don’t tell us, if you don’t report this case, we won’t know. You can’t stay in your house and believe that we know what is going on there. We have help lines, e-mail addresses, sms, to be able to take care of everybody within Lagos,” she said.

NGOs call for action on rape of children

Meanwhile, a coalition of nongovernmental organizations on Thursday called upon the Nigerian government to take urgent action to combat the menace of the rape of children in Nigeria.

In a statement released in Lagos and signed by Emilie Secker, Advocacy Officer at Stepping Stones Nigeria, the group said that they had documented an alarming number of cases involving the sexual abuse of girl children over the last six months as part of their Niger Delta Child Rights Watch (NDCRW) Project.

Michael Gbarale, NDCRW Child Rights Officer in Port Harcourt, Rivers State, said that he had “personally” investigated 18 cases of rape including a girl of 13 who was raped by a group of boys; a man who sexually assaulted sisters aged only 6 and 3 years old; and a girl of 10 who was raped at gunpoint.

Mr. Gbarale added that only two of the 18 cases had been charged to court.

“A key problem is the lack of government welfare services available to these children, who therefore became dependent on NGOs to provide the medical care and counselling needed following such horrific ordeals,” said Mr. Gbarale, adding that there was an urgent need for government agencies to make supporting children who have suffered rape a key priority.

Ese Edoja-Ibor, NDCRW Project Officer, said that the Nigerian government has a duty to make sure all offenders face justice.

“The rape of children is an appalling crime prohibited under the Child Rights Act and international human rights law,” said Ms. Edoja-Ibor of the Calabar based group.

“Sadly, most matters of rape are not investigated by the police effectively. In most cases the perpetrators offer money to either the police or to the victim’s family, leaving the child without any recourse to justice.”

“Here in Cross River State we have been very pleased to recently bring a case of attempted rape against a child before the newly-established Family Court.

“We now urge the Nigerian government to do everything in its power to make sure that these courts are enacted across Nigeria so that all those who violate children are punished for their crimes,” she said.

Rape is an extremely serious criminal offence yet also one of the most hidden crimes in Nigeria. It is often left unreported because of the stigma and shame associated with the crime, and due to the lack of investigation undertaken by the police.