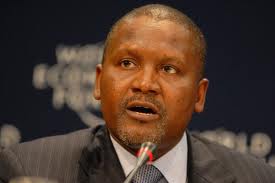 Mr. Dangote, 57, with a total net worth of $11.2bn is ranked 76th in the world. He is the only African in the list of 100 richest people worldwide.  The source of Mr. Dangote’s wealth was described as “sugar, flour, cement.”

He fell two places from last year’s ranking which put him in the 74th position in the world. His fortune has also dropped by  $2.6bn down from the $13.8bn it was in 2011.

A report by Forbes describes the billionaire as “Nigerian commodities titan,” saying he is “Africa’s cement king.”

In February, Mr. Dangote announced the opening of a new $1 billion Nigerian cement plant. The launch of the cement plant in Ibeshe, Ogun state, was attended by President Goodluck Jonathan; Ibikunle Amosun, the Ogun State Governor; and other top public officials at Federal and state levels.

The cement plant is expected to increase the Dangote cement production in Nigeria by 40 per cent.

Mr. Dangote is a major financier of political parties in Nigeria, particularly the PDP. He was one of the largest donors to the elections of late President Umaru Yar’Adua and also Mr. Jonathan. Some of his donations include $1bn to the re-election of President Olusegun Obasanjo in 2003, N200bn to the Obasanjo library project, N3bn to the PDP secretariat among others.

In November 2011, he became the first Nigerian non-public official to be decorated with the second highest national honour in Nigeria, the Grand Commander of the Order of the Niger (GCON).

Mr. Dangote is believed to have benefitted immensely from Federal Government directives and patronage which prompted the U.S. embassy in a cable to Washington released by Wiki leaks to state among others that “it is no coincidence that many products on Nigeria’s import ban lists are items in which Dangote has major interests.”

Mike Adenuga, 58, another major PDP financier, is the only other Nigerian in the Forbes list of billionaires. Mr. Adenuga is estimated to be worth $4.3bn and is ranked 248 in the world. His source of wealth was described as “telecom, banking, and oil.”

In 2009, it was reported that companies owned by Mr. Adenuga owed the Nigerian Government N6billion naira in taxes.