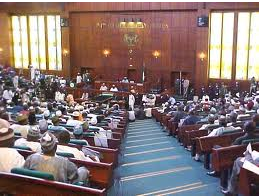 Drama in House of Reps over motion challenging Sanusi

The House of Representatives on Wednesday ebbed closer to fresh violence over a resolution challenging recent controversial donations of more than N600m by Central Bank Governor, Sanusi Lamido Sanusi, to bomb victims and a school project.

Mr. Sanusi’s donation of N100m to bomb victims in his home state of Kano, and N25m to Madalla bomb victims, as well as N500m for a University of Benin building project, have put him in the line of fire, with critics questioning CBN’s charity role and why previous victims in other states had not been compensated by the bank.

One of the prayers of the motion sought the summons of the CBN Governor. The prayer was granted and Mr. Sanusi is expected to appear before the House Committee on Banking and Currency.

The situation at the house however degenerated rapidly after a member from Yobe State, which has seen more Boko Haram bomb victims than Kano state, Goni Bukar Lawan(PDP), speaking in support of the motion, described Mr. Sanusi as a terrorist.

“The moment I heard that the CBN governor, Sanusi Lamido Sanusi went to donate N100million to victims of Boko Haram attacks in Kano State, I quickly rushed to my constitution to see if Yobe State was no longer part of Nigeria,” Mr. Lawan said.

“The attacks by Boko Haram happened in Yobe State before Kano State , so are we not part of Nigeria? I also remembered that when the Maj. Gideon Orkar coup happened in the regime of Gen. Ibrahim Babangida(1985-1993), Orkar said in his coup speech that the entire North East was thereby excised from Nigeria to be joined with Niger, so I was afraid that Yobe State was actually removed.

The remarks drew fury and laughter as well from supporters and opponents of the motion.

A member from Kano State, Bashir Babale(PDP), challenged Mr. Lawan and was restrained from physically assaulting the lawmaker.

Later, most members from Kano State stormed out of he sitting, protesting the Speaker, Aminu Tambuwal’s decision to allow the passage of the resolution.

The dramatic session presented an opportunity for majority of the legislators, who have expressed disgust at the donations privately, to openly take on a sensitive issue that has dominated national discourse for weeks now.

The members, led by the sponsor of the motion, Uzo Azubuike(PDP, Abia state), argued that the CBN had no business with charity according to sections 35 and 63 of the Banks and other Financial Institutions Act (BOFIA) and section 42 of the 1999 Constitution.

The Minority Leader of the House, Femi Gbajabiamila(ACN/Lagos), described the CBN under Sanusi as a “spendthrift” institution “bleeding the economy of the country”.