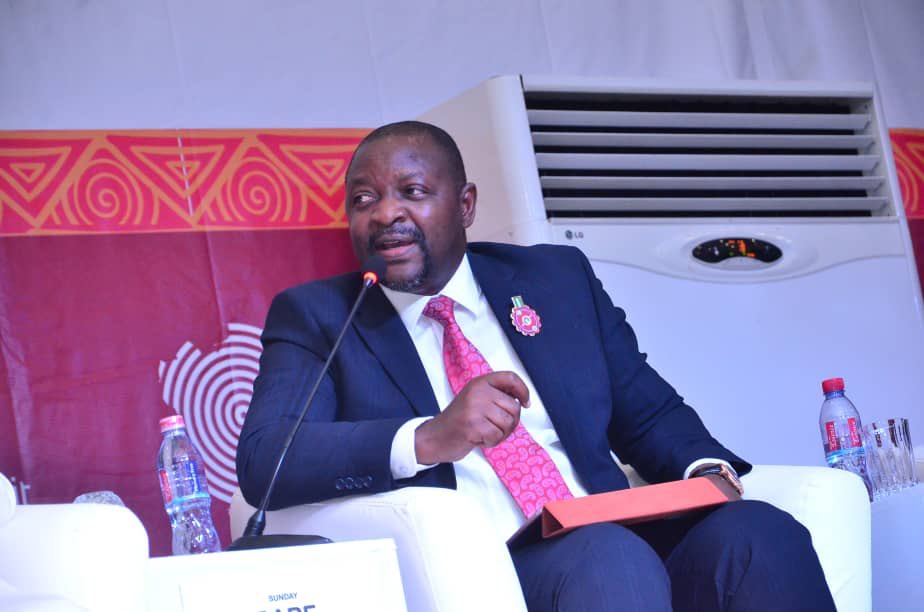 Sunday Dare: One Year Journey as Minister of Youth And Sports

It is not unusual to see those in the sports fraternity often make a case for one of their own to be saddled with the responsibility of running the Sports Ministry whenever it’s time to appoint a new minister to man the all-important ministry.

It is the same way medical doctors always want one of their own to be appointed Health Minister.

In this light, it was not surprising that there were pockets of discordant tunes when Sunday Dare, a journalist, was deployed to the Ministry of Sports and Youth after his screening and confirmation by the Senate in 2019.

However, what Mr Dare does not possess in sports experience, he has in his impressive curriculum vitae which saw him excel in his chosen field of journalism before detouring to politics

Promises Made at the Beginning

As is often the case, new ministers come in with vigor and sweet promises to turn the fortunes of their ministries around. Mr Dare was not any different.

Like his predecessors, the Youth and Sports Minister promised not to be a football minister alone but a minister who will cater for the sports in the country.

He also promised not to neglect the second leg of his ministry: youth development.

After his inauguration, Dare rolled out the four-point agenda he would deploy to revive the ailing sports sector.

Among these was grassroots development with states governors and educational institutions all anticipated to play key roles.

He also reiterated his desire for the provision of facilities, which include resuscitating the moribund ones and adding new ones, where needed.

With sports often seen as a pastime in this part of the world, the Minister promised to change the trend and make a clear business model for the sector as it is the case in developed climes.

Dare also assured that he would institute an Athletes’ Sustenance Fund, which will ensure that Nigerian athletes are always well-funded for training and other activities in and out of competitions.

He also promised innovations that would improve the well-being of the Nigerian youth.

With almost half of his one year in office hampered by the Coronavirus pandemic, it may be difficult to holistically assess the minister thoroughly but nonetheless, one can enumerate some of what could be termed achievements so far, not minding some loopholes evident in some of the said achievements.

One of the biggest problems of sports in Nigeria is funding. Over the years, athletes got little or no financial support from the sports ministry. They had to fend for themselves, straining their lean purses to pay coaches who trained them for major tournaments. But, Dare has been lauded for introducing what he called “Adopt A Talent Initiative” on his assumption into office.

Through the initiative, a handful of athletes now have less to worry about for training grants to get in shape for the Olympic Games as they have been ‘adopted’ by corporate bodies and wealthy individuals who are saddled with providing funds to augment their needs

While seen as a good initiative by many, Dare has been criticised, surprisingly, by his predecessor, Solomon Dalung, who claims Dare stole the idea from a sports journalist, Jide Fashikun, now late, who has not been given his due credit for the initiative.

The sports minister won more friends than enemies when he revisited the long-awaited demand to reach out to ailing sports legends and the vulnerable. He believes there is a need to reconnect with people that laboured to put the country’s name on the world map. In this regard, the likes of Sunday Eboigbe, Kadiri Ikhana, Christian Chukwu got financial support to treat their ailments.

Similarly, the minister has extended his assistance to the mothers of late Rashidi Yekini, Samuel Okwaraji and quarter-miler Sunday Bada while the families of late coaches Shuaibu Amodu, Stephen Keshi, and Mudashiru Lawal Manga Muhammed are now on his monthly welfare scheme package.

This gesture has widely been commended and even pricked the conscience of the likes of the Nigerian Football Federation to follow suit.

True to his words that he would take sports away from being just a pastime or mere recreational activity to being business as it is done in developed countries , the minister appears to be serious in this direction.

There is a new Sports Industry Policy(SIP) in place. According to the minister, the new SIP will replace the obsolete 2009 version and will address four key areas “3 Is and 1 P” – Infrastructure, Investment, Incentives, and Policy, that will catapult sports in Nigeria to the next level.

The new SIP framework is commendable but what is more important is the application and implementation of the draft document as past experiences have shown that the contents of such documents were never implemented. in the past.

The Nigerian Youth Investment Fund (N-YIF), which was approved by the Federal Executive Council (FEC) late July, can easily pass as one of the biggest gains of Dare in the office so far

N-YIF is dedicated to investing in the innovative ideas, skills, talents, and enterprises of youth.

Commitments for rehabilitation of the Lagos and Abuja National Stadia

Still in line with his promise of revamping moribund sporting facilities, the Minister has shown he has better ideas of getting things to work again than most of his predecessors.

The Minister sometime ago announced that he had secured commitments from business moguls Aliko Dangote and Kensington Adebutu (Baba Ijebu) for the renovation of the Abuja and Lagos National stadia respectively.

The development is commendable as the government will no longer have to dip its hands into its own lean purse to spend on facilities it allowed to go bad in the first place.

However, several months after the big pronouncements not much progress has been made; a development some have hinged on the Coronavirus pandemic. If Mr Dare is able to pull this through, it will be a great legacy for his time in office.

Although some say it is still early days to commend him, Mr Dare has done well in avoiding the ever-recurring NFF crisis, a huge distraction for his predecessors in office

The minister is seen so far as not frolicking with the NFF leadership as he has openly told the Federation to put its house in order for proper working synergy.

Also, Mr Dare has not failed to call a spade a spade in his dealings with the NFF so far, as he has told those in charge of the country’s football to clear their name of the corruption tag they have if they are to be taken seriously by sponsors, all and sundry.

However, while he is careful enough with the NFF, the Minister has been fingered in the crisis in one or two sporting federations especially the Athletics Federation of Nigeria where he is seen to be backing a faction against the other.

One of the right things expected of a leader is to foresee a problem and nip it in the bud before it escalates.

Rather than being seen as backing factions in some of the federations, the Minister ought to be seen as championing autonomy for them.

Another drawback in the Minister’s one year in office is the bogus N14 billion request for Nigeria’s participation at the Tokyo Olympics.

With the International Olympic Committee providing for travels and accommodation of participating countries, it is difficult to justify the spending of N14bn for the Tokyo Games now moved to 2021.

Also, while his swift move to pay the IAAF the excess money it erroneously paid Nigeria is commendable, at least, for the embarrassment it caused the nation, one would have expected that the culprits would have been fished out and made to face the full wrath of the law.

Although it is a fair start for Mr Dare in office in the last one year, the need to be focused, going forward, cannot be overemphasized.

There is a need for the Minister to focus on aggressive grassroots sports development in collaboration with state and local governments in the country as he begins his second year in office.

The Minister also needs to take a back seat concerning the country’s participation in games and championships and let the Nigeria Olympic Committee and sports federations do the needful in this regard.

The ministry should give autonomy to all sports federations as it is the case in sane climes and focus on initiatives and programs that will lead to the revival of sports at tertiary, high school and grassroots level

The ministry should be more preoccupied with programs and policies that will lead to the emergence of a vibrant sports industry that will invariably help to enhance critical sectors of the economy like tourism, entertainment, hospitality, and others.

The noticeable gains in the youth sector should be sustained and improved upon also in the years ahead.