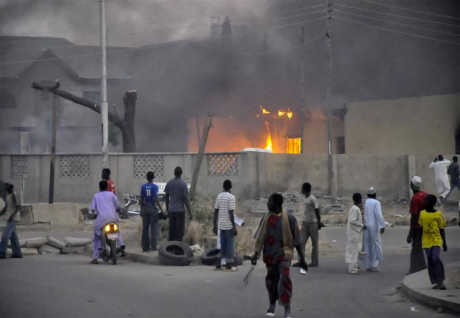 Konduga town is less that 20km from Maiduguri, the Borno state capital.

An eyewitness to the incident at the police station, who is also a resident of the town, said the gunmen arrived the station shortly after the early evening prayer, shooting sporadically into the air before they started throwing explosive devices at the building.

The source, who declined to be named, said the gunmen succeeded in killing at least three policemen during the attack on the station.

He also said a six-year-old boy was hit and killed instantly by stray bullets.

He said the boy was caught right in front of his family house which was not far from the police station.

Another resident of the town, Mallam Sheriff, informed Premium Times that the gunmen also attacked the prison and a block in the local government secretariat housing members of the NSCDC.

“The men arrived the secretariat through the main gate but passed all the other blocks in the building and went straight to the legislative building, but as you know we don’t have councilors now, so it is the civil defence that are using the block, and the men burnt down the place before they left,” Mr. Sheriff said, adding that the gunmen met very little resistance when they attacked the prison.

“You know the prison is a satellite one and it is mainly used as a stopover for prisoners being transferred. It is also located within residential buildings unlike many of the prisons elsewhere. I learnt that there were only five prisoners there as at yesterday,” he said.

Some residents who spoke to us over the telephone also said that was the first time gunmen were attacking the town despite its proximity to Maiduguri.

They attributed the attack to the shooting of a pupil of a local Islamic school, popularly known as almajiris, by some policemen at a check point in the town.

Some of them said immediately the police shot the boy last week, there were speculations of a possible attack.

“When the boy was shot, people started saying that it was an open invitation for attack on us,” said Mr. Sheriff, who added that the boy did not even die from the attack.

Others claim that a member of the Boko Haram sect was arrested and might have been in the prison the gunmen attacked to set him free.

Premium Times made several attempts to get confirmation of casualties from the spokesman of the Borno state police command, Samuel Tizhe.

As at the time of publishing this report, Mr. Tizhe had not responded to our enquiries.

Before Nigeria Implodes! By Chido Onumah