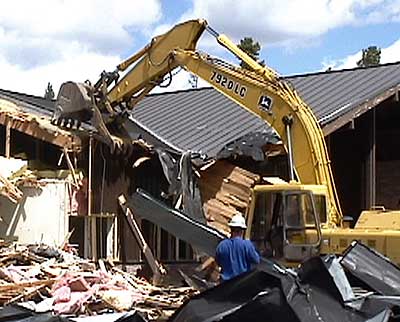 Some Muslim civil servants at the Lagos State Secretariat, Alausa, on Monday, expressed disappointment with Babatunde Fashola, the state governor, over the demolition of mosques within the secretariat.

The demolition, which was done over the weekend, was sequel to an order given by Mr. Fashola, who is also a Muslim, two weeks ago which placed a ban on all religious activities within the secretariat.

The mosques pulled down include the one behind the Deputy Governor’s office as well as the one attached to the Ministry of Justice.

“We now have to go across the road, outside the secretariat, every time we want to pray,” said a civil servant at the Ministry of Finance.

It was gathered that the demolition was carried out over the weekend to avoid violent reactions from the Muslim community.

Civil servants who pray at the mosques were shocked on Monday when they arrived for prayers only to discover that the temporary structure had been reduced to rubble.

A senior government official said that the ban on religious activities was for “security reasons.”

According to the official, all Muslims are expected to go to the Lagos State Secretariat Mosque, Alausa, for their prayers.

States to get 13 per cent derivation on solid mineral revenues, says RMAFC