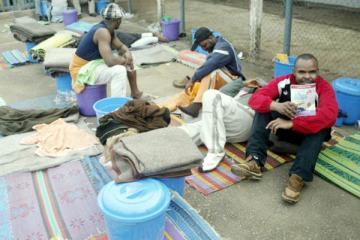 The Federal Government of Nigeria has threatened to pay back the South African government in kind for the treatment meted out on Nigerian travelers if it is found that the action to deport about 125 Nigerians was unjustified.

The Minister of Interior, Abba Moro, said this in Abuja while addressing state house correspondents at the Aso Rock Villa.

The minister said Nigeria had the capacity to reciprocate squarely the ill-treatment of its nationals adding however that for now, the Federal government would want to believe that the South African acted in good faith.

The Minister was reacting to the deportation of about 125 Nigerians from South Africa on the excuse that they did not have valid travel documents, especially the Yellow Fever card.

“We don’t want to speculate, I want to say that if South Africa have every reason to believe that the documents that some Nigerians were carrying are fake it is incumbent upon us to find out the authenticity of the situation. I can assure you that we are going to appropriately react.

“But for the time being, I want to say that the Nigeria immigration service has the mandate to allow persons into Nigeria and people who are not qualified certainly will not be allowed to enter the country, but let’s not hasten by jumping into conclusion the possible reasons why South Africa has repatriated Nigerians.“I want to assure you on one thing that Federal government has the capacity to reciprocate appropriately if it found out that it is not done in good faith.” Mr. Moro said.

The minister said the two countries have had cordial relationship and spoke of the role played by Nigeria in the political history of South Africa.

“Let me say that we should not forget very easily the role Nigerians played in the liberation of South Africa and I want to believe that the sacrifice and contributions of Nigeria is not lost,” he said.

On allegations that the Nigerian Embassy in South Africa was invaded, Mr. Moro said the Nigeria/South Africa joint commission is already working on that and once again reiterated the country’s capacity to retaliate.

“I want to state that the Joint Commission of Nigeria and South Africa is working. At the moment Nigeria maintains a very cordial diplomatic relations with South Africa and I can assure you that we will react appropriately if it is found that South Africa has taken an unfriendly action against Nigeria,” Mr. Moro said.

The Minister also took time to discuss the issue of Nigeria’s porous borders which he alleges has allowed unscrupulous elements to come in and destabilize the country. He said Nigeria, just like most big nations, faces the challenges of border porosity but he quickly added that the government had taken up the issue seriously and had been collaborating with the governments of neighbouring countries on the matter.

“What we have done recently against the backdrop of the conclusion that we have terrorism in Nigerian and the fact that we have people coming from outside the country coming in to perpetrate terrorism in this country is for us to fortify our borders which we are doing.“At the moment we signed several joint agreements with our neighbouring countries, the recent being the one we signed with Cameroon, we have such arrangement with Niger and Chad as well. We have all agreed to step up our activities at our borders to ensure that people who have nothing to do with Nigeria or any other country for that matter will not enter.

“If you don’t have any legitimate business doing in Nigeria the immigration service within the level of their own capacity will not allow you to enter Nigeria. As you have heard recently, those who find their way through to Nigeria one way or the other have also been eased out of the country. The immigration service is topping up its activities to discharge its mandate of securing our borders.”Mr. Moro also said though the ECOWAS pact on free movement is still in place, certain regulations still apply.

“The fact is that I keep insisting that ECOWAS protocol which provides for free movement does not provide for free lunch in the sense that you can just wake up from your bed and say you want to go to any African country. You must also come with appropriate document. There is ECOWAS travel document that the member nations issue out to their citizens. If you come to Nigeria without those travel documents then certainly you have not followed the ECOWAS protocol then you are illegal alien,” the minister said.

U.S. to open Consulate in Kano-Envoy