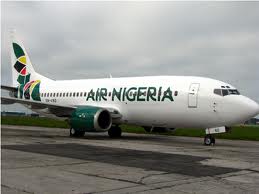 An Abuja-bound Air Nigeria Boeing 737 aircraft was turned back mid-air Sunday night resulting in families sleeping on the cold floor and metal chairs at the Lagos Airport.Passengers on board flight VK55 were initially scheduled to depart Lagos on March at 6 p.m. Estimated time of arrival in Abuja on the 1 hour flight was 7:20 pm. The aircraft conveying 124 passengers eventually left at 10 p.m., four hours behind schedule.”Just as the craft was approaching Abuja, the pilot was told to turn back,” Utibe, a mother of two, told Premium Times.The pilot, captain Ibrahim Ba, had announced the descent of the plane and asked all passengers to take landing positions; but few minutes later he announced airport authorities at Abuja’s Nnamdi Azikiwe Airport had denied them access to land.  “He announced Abuja is not allowing him to land, that Abuja airport is closed. So he had to turn around and go back,” Utibe said.On return to the Murtala Mohammed Airport, Lagos, at 20 minutes past midnight, the co-pilot explained that before they left for Abuja, they had contacted the authorities in Abuja airport alerting them they would be arriving slightly after 11 pm; to which they agreed before their take off.”It was when we started the descent, we now radioed Abuja that we are approaching and would land seven minutes after 11 pm, but the control tower said they have closed,” the co-pilot was quoted as telling passengers.Despite entreaties to the  Abuja control station that on board the plane, filled to capacity, were parents, children and the aged, the aircraft was not allowed to land. It returned to Lagos where another drama ensued.Several passengers, including former Ogun State governor, Gbenga Daniels, cared less about the plight of others as they alighted and left the airport for their various abodes. Others, having no where to go, quickly returned to the plane. They refused to leave and held the cabin crew hostage inside the plane, insisting Air Nigeria take responsibility for their well being. Not even the intervention of airport officials could dissuade the visibly angry passengers who felt slighted that the airline had left them alone to their plight, several hours after their initial flight was delayed. The airline’s duty manager, identified as Mr. Tunde, eventually came and pacified the passengers by telling them that for the same flight to have sufficient fuel to take them to Abuja early today by past 6 a.m., they needed to disembark. He promised making the departure lounge ‘comfortable’ for them to sleep.Passengers thereafter requested for food, pillows and blankets, used for long-distance trips which are kept in their store, to keep warm. While only remnants of cake, juice and water was given to the stranded passenger, Mr. Tunde never provided them the much needed blankets.Scores of passengers were left crouching, some lying on the cold floor and others across the metal chairs in the airport, while waiting for their new flight scheduled of 6 a.m. this morning.”There were about 60 of us. They did not give us any covering. And in the early hours the place was cold,” said Amara Nwankpa. “It was just horrible. There was no sanitation, no water in the rest room.”For several business persons, the lack of hygiene and proper sanitation in Nigeria’s busiest International Airport meant not being able to even sparsely clean up ahead of their early engagements in Abuja.The spokesperson for the Nigerian Airspace Management Agency (NAMA), Supo Atobatele, however defended the agency’s refusal to allow Air Nigeria’s aircraft to land, citing a February 7 Notice To Air Men (NOTAM) against local and international flights landing in Abuja after 11 p.m. “The airline is not serious,” Mr. Atobatele said. “Because there was a NOTAM issued to airlines across the globe that they can only operate between 5 a.m. and 11 pm.That the airport is closed for maintenance of the apron expansion and rehabilitation of approach light on 04/22 [runway]. 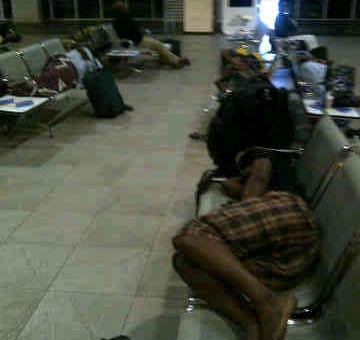 Mr. Atobatele said all airlines and pilots had being duly “advised to adhere strictly” to the NOTAM which would last till June 30. He denied there was any concession given to Air Nigeria’s flight VK55.When contacted, Air Nigeria’s spokesperson, Samuel Ogbogoro, said he needed time to get the facts of the matter, promising to give an official reaction by 3 p.m. Nigerian time.Also reached for comments was the spokesperson for the Federal Airport Authority of Nigeria (FAAN), Akin Olukunle, who twice cut the call following questions about the poor maintenance of facilities at federal airports.”I have never had such an appalling experience, ever in my life,” said Jose Dovonou, a citizen of Benin Republic, who unable to sleep throughout his ordeal, arrived at his 9 a.m. meeting in Abuja disoriented. “They just abandoned us. This is not done in civilised countries.”