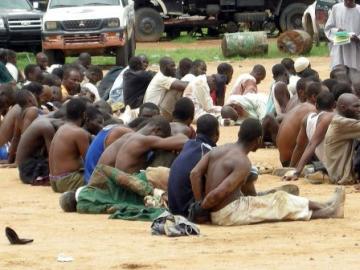 Residents told newsmen that three of the victims, including a woman and her 10 year-old son, were killed at night in their houses in Zannari Ward. “Three persons were killed in two separate attacks in Zannari on Saturday night. In the first attack, some gun men invaded the residence of a woman and kiled her, along side her 10 year-old son.
“They also killed another person in the same area before leaving,” said a resident, Malam Usman Modu. He said the fourth victim was killed while opening his shop on Sunday morning at the Gamboru Market. “The victim was an iron bender. They killed him as he was opening his shop to start business for the day,” said Malam Aliyu, another resident. Mr Samuel Tizhe, the Spokesman of the Borno Police Command, declined comment on the matter but a senior police officer confimed the incidents. “We have launched a manhunt for the killers and will surely get them sooner of later,” stated the officer, who spoke on the condition of anonymity.