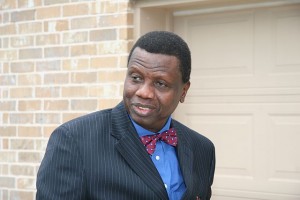 The ambience at the Redeemed Church’s Holy Ghost Arena Saturday morning was devoid of the rowdy but ecclesiastical presence that were part of the service to mark the General Overseer’s 70th birthday the night before.

There were also no signs of top government officials, including a representative of the president, who graced the celebration at the massive arena.

“Everything is quiet now but we’ll have another programme in the evening,” said Joy Olabode, her voice barely audible after the charged activities of the night before.

The three day “Special” Holy Ghost Service of The Redeemed Christian Church of God to mark the 70th birthday anniversary of Enoch Adeboye, the General Overseer, would be rounded off Saturday.

“We want to encourage you to be expectant throughout these three days,” said Mr. Adeboye, in his welcome address at the anniversary themed ‘Let the fire fall’.

And judging by the magnitude of fire that fell on the congregation, according to some worshippers, suggestions for Daddy GO, as he is popularly called, to “slow down” as he steps into the septuagenarian club are as unwelcome as they are unthinkable.

Mr. Adeboye’s prayers on the night depicted a man incapable of slowing down in the near future.

In a tribute by the North American arm of the church, Mr. Adeboye was praised for continuing to lead his members “into affirmative attitude.”

“Evidently, the best is yet to come and we have written this in confidence, dwelling on the faithfulness and truthfulness of the word of God,” wrote James Fadele, the chairman.

For members of the congregation, the general overseer is not removing his foot from the gas pedal in the nearest future.

Patrick Asuquo, a church member, says that suggesting that the “GO” slow down is “unthinkable.”

“Age is just a number when it comes to worshipping God,” says Patrick Asuquo, who newly converted from the Catholic church.

“As long as he can still move and talk, let him continue. Even if he can sit and preach, no problem,” Mr. Asuquo adds.

Edward Ndukwe, a church worker, says that God would see Mr. Adeboye through “his service to humanity.”

“This is a spiritual assignment and if it was God that called you, He would give you the strength,” he adds.

At the 2012 Solemn Assembly last Tuesday, told the gathering that “he can’t afford to slow down” because the auditorium that God had showed him is as large as Ibadan, the Oyo State capital.

The Holy Ghost Arena is arguably the largest worship structure in the world with an estimated capacity of about five million people, all seated.

The massive auditorium with its tiled floors was reportedly constructed at a cost of $60 million (about N7.7 Billion) and was dedicated in 2007 by Mr. Adeboye.

“We are nowhere where we should be,” Mr. Adeboye had noted.

“If only they see how far we are from our goal, they will only be fasting and praying.”

While members waited for the programme of the third and final day to begin; other activities were in full swing.

A nursing mother, surrounded by people sleeping on their mats and mattresses, sits on a wooden bench beside a travel cot draped with mosquito nets and breast feeds her baby.

Nearby, another woman puts a small pot on a gas cooker and stirs the content while her two children watch in muted anticipation.

Three young men crawl on all fours at a raised platform that serve as the altar and mutter incoherently, their eyes shut.

“Let us assure you that the presence of the Lord will be awesome all through the programme and your long awaited miracles will be delivered in Jesus name,” said Mr. Adeboye.