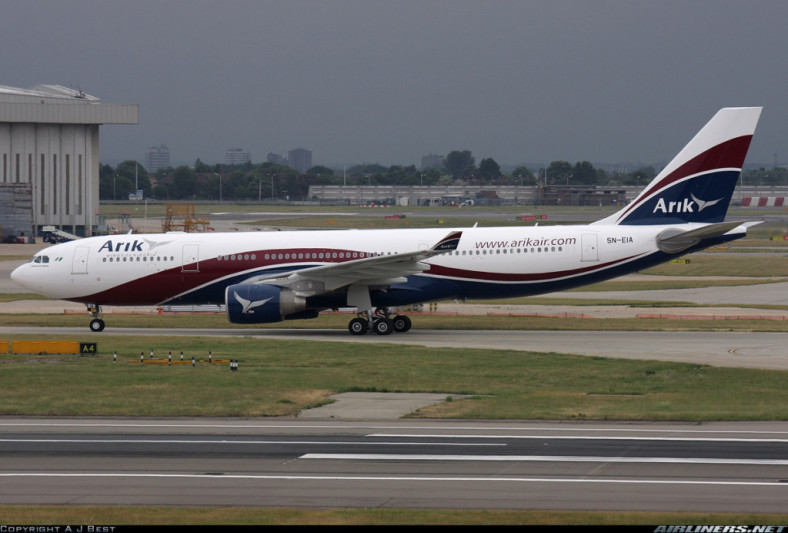 Arik has suspended flights to the country in anger

Many Nigerians aboard Arik Air and South Africa Airways flights were refused entry to South Africa on Friday, the News Agency of Nigeria (NAN) reports.

The Southern Africa correspondent of NAN reports  that the passengers were denied entry by the South Africa Port Health authority and the immigration service on the ground that they had invalid yellow fever vaccination cards.
One of the passengers,  Olaminde Olaofe, told NAN that they obtained their cards from government authorised health agencies in Nigeria and added:  “This is very embarrassing and dehumanising.
“It is an embarrassment not to us as passengers alone but to the Federal Government of Nigeria that another country will say the document we, as Nigerians, obtained in our country is fake.
“We had arrived here about 5.30 a.m. and until now we are still kept at the airport by the immigration officer under the claim that our yellow fever cards are not recognised.
“Some of us are not first time travellers to South Africa and we had used the same yellow card before to enter the country.
“I obtained my card from Eti-Osa Local Government along with my brother. While I am allowed entry, my brother is held by the immigration people.’’ Olaofe said  33 school children on excursion were also affected.
Arik Airline Zonal Manager in South Africa, Kinsley Uzor, said 28 of the airline’s passengers were returned to Nigeria on Thursday.
“It is an unfortunate incident, 28 of our passengers who came on Thursday were returned back to Nigeria today by the immigration and the Port Health authorities.’’
He added: “50 of our passenger in today’s flight are still at the airport right now, we are still trying to sort out the problem.
“The South Africa Immigration and Port Health are saying that they don’t recognise the yellow cards and that signature on the cards are irregular.
“We are not the issuing authority for yellow cards, our responsibility is to carry our passengers once they are cleared by the Nigeria port authorities.
“Before now, even if a passenger does not possess yellow card, at the airport he or she will be given vaccination, with payment of 50 dollars.
“But the new South Africa law says there should not be entry into the country without the vaccination card.
“Their argument is that the law stipulates that intending travellers must get vaccination 10 days before they travel.’’
Mr. Uzor said the Nigerian High Commission and the Consulate were already intervening in the matter.
A Nigeria consulate staff, who spoke with NAN under condition of anonymity, confirmed that Nigerian authorities were aware of the matter.
“We are aware of the incident and we are working with the High Commission to resolve the matter,’’ the official said.
Meanwhile, Arik Air issued a statement on Friday temporarily suspending all flight operations between Nigeria and South Africa with immediate effect.
A statement signed by Isla Moffett, Sales and Marketing Manager of the company, stated that the decision to suspend the daily B737-800 service between the two countries was taken due to the ongoing dispute with South African Port Health authorities on yellow fever documentation.
“Many of our Nigerian passengers have been detained and refused entry into the country in the recent month.
“The Port Health authorities cite as being incorrect or unrecognised batch number on the documentation which is mandatory  proof before entrance to the country.’’
The statement said the  situation had escalated “culminating in over a hundred Nigerians and West Africa passengers travelling from the region being refused entry ,including 50 Arik passengers today.
“Arik have reached the conclusion that the irregular and obfuscating  nature of this protocol is having an impact on its passengers and does not wish to proceed with operation into a country where its customers are at risk of detainment or any other measure meted out arbitrarily by the authorities.’’
In the statement, the Chairman of Arik, Michael Arumemi-Ikhide, said the airline would  not stand-by and watch its passengers reach their destination after overnight flight only to be met with a protocol and procedure that was  at best haphazard and at worst discriminatory to many passengers.

Court to deliver judgment in Charles Taylor trial next month