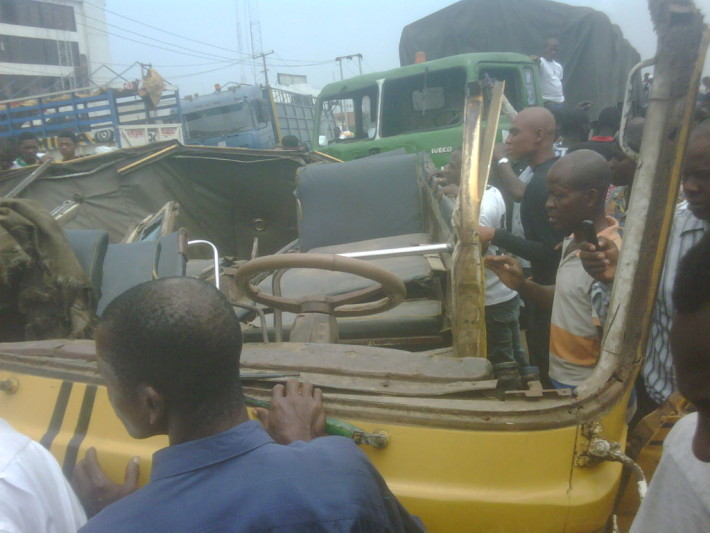 A yet-to-be identified woman was killed while five others suffered serious injuries when a trailer rammed into a commercial bus, Friday, at Odun-ade, along Lagos-Badagry expressway.

Eyewitnesses said that the driver of the trailer, with number plate AA 334 KEF, lost control of the vehicle and hit the commercial bus from behind.

The heavy impact tore off the roof of the bus, with number plate XC337 AGL, with the roof’s jagged edge landing on the passengers in the bus.

“The trailer was in very high speed when it hit the bus,” said an eyewitness who identified himself as Dotun.

The commercial bus was smashed beyond recognition. Various items such as packs of toothbrush, frozen fish, and clothes littered the scene.

“A fat woman who was seriously injured was shouting her bag of money as she was being rushed to the hospital,” Mr. Dotun added.

Police officers who arrived at the scene said the corpse would be deposited at Isolo General Hospital.

A face-off between the police officers and ‘area boys’ was averted after the latter accused the officers of withholding a blackberry phone and a bag purportedly containing money belonging to the accident victims.

“All the phones are here and they are switched on,” said a police officer at the scene.

“One of the phones have rang and we spoke to the person who said he is at Alaba International market and is on his way,” the officer said, adding that all items belonging to the victims are in safe custody.