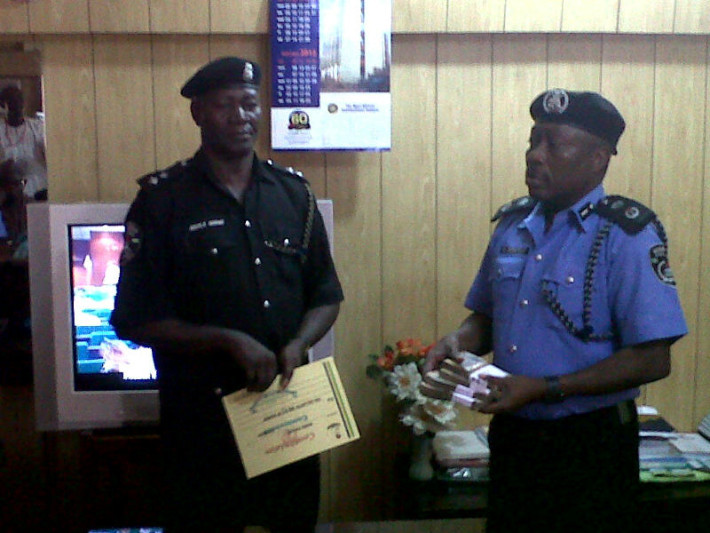 The Adamawa State Police Command has promised a bloody confrontation with the extremist Boko Haram sect, which has been attacking its formations in the state.

So far, the command’s formations in Madagali and Demsa have been attacked in quick succession, leading to the death of five officers and the wounding of others.

The state police commissioner, Adenrele Shinaba, drew the battle line with the sect Thursday while presenting  a letter of commendation and a N200,000 reward to the Divisional Police Officer of Demsa police station, Habila Adamu, an Assistant Superintendent of Police,  for gallantry of his men in repelling a late night attack on Tuesday.

Some  armed gunmen  had attacked their station along Numan/Demsa road of the state, firing sporadically at everything in sight.

The financial reward and letter of commendation presented to the officers, Mr. Shinaba said, are to serve as morale booster to other officers and men of the police force.

According to the commissioner, the performance of the officers is “reflective of the paradigm shift in policing, exemplified by the new leadership of the inspector general of police”.

However, Mr. Shinaba, said the Demsa attack resulted in the death of two persons – a police corporal, Lukman Abdullahi – and one of the unidentified gunmen  killed by  the police in the attacks. The commissioner then warned the armed gangs to steer clear of the state, saying his team  would not condone any act of “aggression” on their “legitimate places of work.”

He vowed to meet any armed aggression on police formations with “sheer force”.

“The police in Adamawa State,” Mr Shinaba said, “will resist this armed insurgency even at the risk of their lives to assure the security of the populace of the state.”

He also declared that the police would give the armed insurgents a “bloodied nose”, in order to give the people of Adamawa a “sense of security”.

Mr. Shinaba urged the public to come forward with any useful information to aide the arrest of criminal elements in the society, promising to release some dedicated phone numbers through which the public could provide tips to the police.

In the same vein, the police commissioner also announced an undisclosed financial reward to some members of the force who foiled an attack on a gas station in the capital Yola, last night.