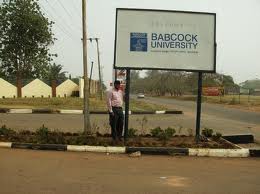 Babcock is one of the reputable private universities in Nigeria

Armed robbers on Wednesday raided a commercial bank inside the premises of  Babcock University, Ilishan-Remo, Ogun.

A News Agency of  Nigeria (NAN) correspondent, who visited the institution shortly after the incident, reports  that the robbers had raided  the Wema Bank branch on the campus.

An eye witness told NAN that the incident happened at about 2:20 p.m,  forcing students as well as staff of the institution to  scamper  for safety while the operation lasted. NAN gathered that the hoodlums, numbering seven,  arrived the institution  in a green Nissan Quest car and shot sporadically into the air to scare away members of the university community. The robbers were said to have succeeded in gaining entrance into the Wema Bank branch and carted away an undisclosed sum of money from the vaults. The three other banks also situated in the vicinity were spared in the operation which lasted 20 minutes unchallenged. It was also learnt that the armed mobile policemen attached to the banks fled the scene as they could not withstand the superior firepower of the robbers. The state’s Commissioner of Police, Nicholas Nkemdeme, who visited the scene for an on-the-spot assessment, told newsmen that three suspects had been arrested in connection with the incidentMr. Nkemdeme described the robbery as an embarrassment, promising that his command would unmask the perpetrators. “I got information that there was robbery going on there (in the school) and I had to mobilise the Area Commander and others to come here. “Well, in the meantime, we have arrested some suspects because we are strongly convinced that these are students’ actions,’’ he said. The Vice Chancellor of  the institution, Prof. Kayode Makinde, confirmed the incident, saying  no casualty was recorded.Mr. Makinde said only three people,  who were shocked  by the scale of the robbery,  had been admitted to the university’s hospital for medical attention. He assured parents and guardians of the safety of their wards, adding that the management would review the security arrangement in the institution. The vice chancellor, however, commended the police commissioner for his prompt response to the distress calls made.