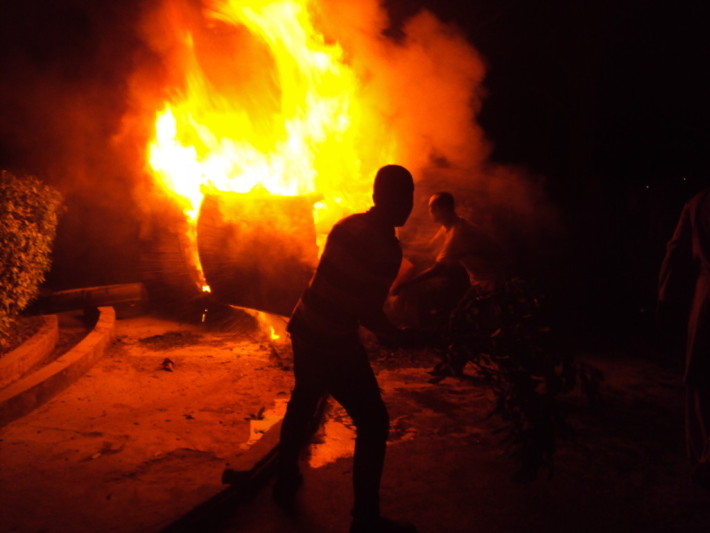 Students battling to put out the fire... Photo: Temitope Samuel

A fire raged for 120 minutes, Monday night, and defied the “inept” fire service of the University of Lagos, claiming a car in a university that recently produced 118 First Class degrees at a go.

A suicidal twist almost became part of the incident as bystanders had to restrain the driver of the burning car from killing himself out of apparent despair. He tried to re-enter the burning vehicle. Co-workers said he got the car on hired purchase.

However, no one was hurt in the incident as all on board rushed out of the vehicle before the fire engulfed it.

The fire, which started at about 7.25 p.m. raged for over two hours before being put under control by some students and security officials of the institution.

The fire service department of the university, although located about 150 meters from the venue of the incident, did not respond to the situation until it got out of hand.

The firemen told students they had no water in their tank.

When they responded about an hour after the fire started, the situation had escalated, and all they had were some cans of fire extinguishers which proved abortive in putting out the fire.

The Lagos State fire service, which responded to distress calls after the fire had been put under control, was denied access to the site of the incident.

It was confronted by a blockade mounted by visibly angry students shouting: “Go away!”

A deputy dean of student affairs, who intervened, could not pacify the furious students.

A student, who was at the forefront of the protest, claimed the dean wanted to hand him over to the policemen who came with the Lagos State fire service, an allegation the dean denied.  The dean said he was only trying to set dialogue in motion.

The affected student, who sustained a minor injury while trying to put out the fire, however, insisted that the assistant DSA was trying to put him in custody subtly.

“He told me to come, but I know their style – they would make me disappear for a while,” said the student who does not want his identity published.

A similar incident happened about 15 years ago where an angry group of about 20 students allegedly attacked firemen who reported 30 minutes late to a car fire incident at the university’s Access Road. The firemen while scampering for safety, it was gathered, had an auto crash.

We have confirmed reports, however, that the students did not attack the Lagos State fire fighters who came all the way from the state’s capital to help put out the fire.

The fire incident exposed some loop holes in the school’s administration.

It also revealed some dissentions that existed among the cab drivers.

One Mr Phillips who is chair of the school’s committee on transportation was quoted by some cab drivers as saying he was glad the incident took place. Some of the drivers said Mr Philips was probably interested in ending cab business on the campus.

Meanwhile, the school administration has come under heavy criticism from the students who called its fire service “inept.”

“What if it was a hostel that was on fire,” asked one angry student.

Meanwhile, the some students have accused the school authority of closing its internet service to forestall upload of details of the incident on social networking sites.  Quite a number of students were seen taken pictures and videos of the unfortunate event.

Efforts to reach the director of the school’s IT facility proved abortive as he was not in the office as at the time of filing this report.

Some staff however, said the Internet service was not closed because of the incident. They said it was still a work in progress and so could be shut down at any time.